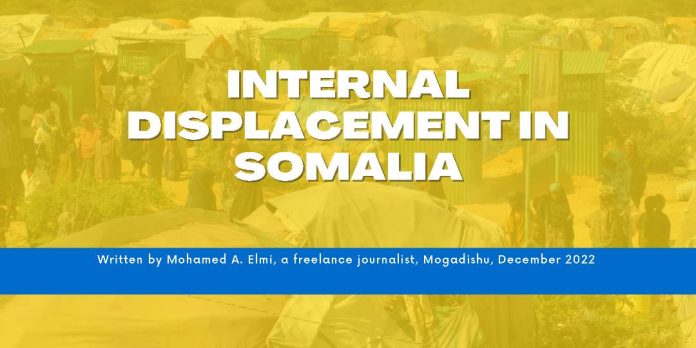 Somalia’s internal displacement has been precipitated by thirty years of ongoing violence and conflict. Reoccurring droughts have exacerbated the situation. Most of Somalia’s nearly 3 million IDPs (people who have moved within their own country) live in the south-central region. They have been forcibly evicted but are still within the country’s borders.

Somalia has the seventh-highest number of internally displaced persons worldwide. Since the late 1980s, one of the world’s longest-running ongoing humanitarian assistance missions has been taking place there (Drumtra, 2014). This marked the start of the rebellion against Somalia’s dictatorship government, which was led at the time by Mohamed Siad Barre. In 1991, several armed factions rose up and formally deposed Mohamed Siad Barre.

After Mohamed Siad Barre was removed from power, clan purging became the way to take over the government. This made the IDP problem worse and forced a large number of people to move, which led to a lot of deaths and famine by 1992. There was a humanitarian crisis, which caused more people to move and a huge international military aid campaign for humanitarian reasons. Around this time, the well-known “Black Hawk Down” incident occurred. Somalia fell further into chaos when the violence got out of hand and turned into fighting between clans. In the 2000s, instances of internal displacement decreased, with periodic increases.

Even though there are still conflicts between and within clans, they are no longer the main reason why people move because of violence. In this category, clashes between military and non-military armed groups are the leading cause. In addition to the threat of direct violence, the lack of economic opportunities and infrastructure in the conflict zone forces people to leave their homes and relocate to other parts of the country.

Climate change is a major cause of Somalia’s IDP crisis, but not as much as violence and conflict, which are also major causes. People with disadvantages have limited access to food, shelter, water, medical care, and sanitation. Because agriculture accounts for more than three-fifths of Somalia’s economy and many IDPs are pastoralists and farmers, climate change has a negative economic impact on IDPs. Droughts and floods force them to flee and look elsewhere for humanitarian aid. This cycle has an effect on the economy as a whole and adds to the problem of inflation, which makes it hard for poor people to buy healthy food.

In addition to humanitarian efforts, steps must be taken to resettle and reintegrate IDPs into society as self-sufficient people with the skills to fit into the new communities they live in and, if possible, to resettle them back in their homes. This will help ease traffic in Somalia’s host cities and add to the GDP of the country as a whole.

“At the moment, IDPs have three options: integration, relocation, or return. Before deciding to move, they must be sure that their home village offers reliable security, basic services, health care, education, and other ways to make a living.

“For people in urban areas to get out of poverty in a stable way, the government and international humanitarian groups should work together to make sure that these IDPs are helped by programs to reduce poverty, such as agricultural finance. Said Prof. Abdulkadir Basheer Mohamed, Vice-Chancellor at Accord University, during an interview with Mohamed A. Elmi

Written by Mohamed A. Elmi, a freelance journalist, Mogadishu, December 2022