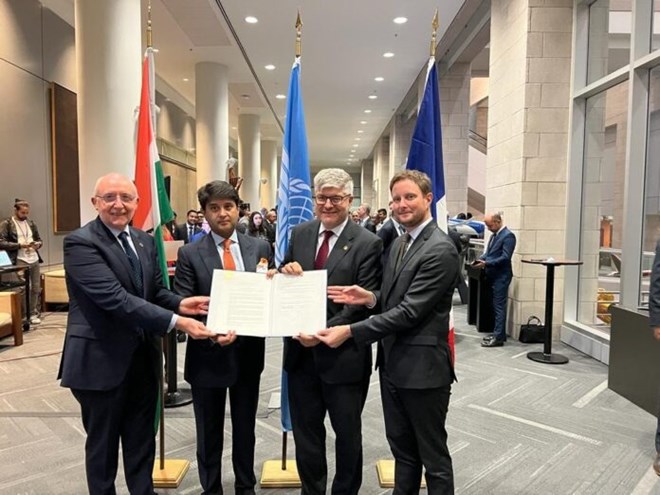 An agreement between the International Solar Alliance (ISA) and the International Civil Aviation Organization (ICAO) was signed on Monday in Montreal during a ceremony that was held in conjunction with the assembly’s 41st session. Jyotiraditya M. Scindia, the minister of civil aviation for India, Clement Beaunne, the minister of transport for France, and ICAO Council President Salvatore Sciacchitano were all present.

Joshua Wycliffe, the ISA’s Chief of Operations, and Juan Carlos Salazar, the ICAO Secretary-General, both signed the MOU.

Scindia and Sciacchitano brought up the possibility of the ICAO joining the ISA during Scindia’s trip to Montreal in May of last year. The MOU was approved and finished in four days.

The signing of the MOU in the presence of Scindia and Beaunne continues the legacy of the audacious action taken in 2015 at COP 21 [21st Conference of the Parties to the United Nations Framework Convention on Climate Change] by French President Francois Hollande and Indian Prime Minister Narendra Modi.

The ISA is an association of 121 signatory nations and 32 partner organisations, many of which are UN agencies. The ISA strives to develop cost-effective and transformative solutions for using renewable energy in member countries, with a focus on delivering on impact in LDCs (least developed countries) and SIDCs (small island developing states). This is done in order to reduce reliance on fossil fuels.

India made a commitment to achieve Net Zero Carbon in 2070 at COP 26. According to the statement, its strategy is still centred on people and is based on respect and national ownership principles with a commitment to everyone. To enable solar energy to reach the most remote villages and communities, India has committed to installing 175 GW of renewable energy by 2022, of which 100 GW will be solar energy, and reducing its emission intensity by 33–35% by 2030. In 2015, India’s Cochin International Airport became the first airport in the world to run entirely on solar energy.

India has invited countries to help with infrastructure for the implementation of solar projects with the support of France. The alliance has pledged $1 trillion in investment and is dedicated to lowering the cost of solar energy for isolated and difficult-to-reach communities.

The partnership between the ISA and the ICAO through this MOU could not have come at a better time as it will trigger a range of interventions towards developing the capacity of the states to use solar energy. The ICAO is dedicated to reducing carbon emissions in the aviation sector through its numerous initiatives and goals. It will work to spread awareness, support causes, build capacity, and carry out demonstration projects. All of the member states’ aviation industries will be able to go solar thanks to it.