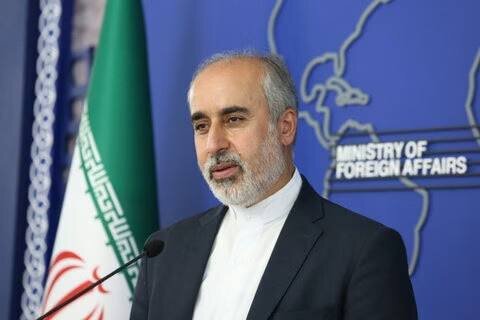 Nasser Kanaani, the spokesman for the Iranian foreign ministry, responded to the European troika’s unhelpful and undiplomatic statement regarding the talks to lift the sanctions.

Kanaani stated that it is surprising and regrettable that the European troika released such a communiqué in a move that diverges from the path of the fruitful approach during the talks, given the current circumstances, in which diplomatic interactions and message exchanges continue between the negotiating sides and the coordinator of the Vienna talks to conclude the negotiations.

The spokesman for the Iranian foreign ministry emphasised Iran’s goodwill and serious commitment to concluding a deal to lift sanctions, saying that Iran’s initiatives and ideas were responsible for the progress made in the negotiations at various points, including the most recent one.

Kanaani cautioned the European parties against being swayed by disinformation campaigns run by outside parties who have long been opposed to the negotiations and are now doing everything in their power to bring about their collapse.

The three European nations are regrettably following the Zionist regime’s lead in pushing the talks toward failure with their ill-advised statement, he continued, and if this strategy persists, they must undoubtedly take responsibility for the results.

Kanaani drew attention to the European allies’ recent passivity as well as their improper and politically-motivated action to support the anti-Iran resolution at the Board of Governors of the International Atomic Energy Agency.

The spokesperson for the foreign ministry urged the European troika to take a more active role in resolving the outstanding issues rather than attempting to thwart the negotiation process.

He then cited the Islamic Republic of Iran’s track record of cooperation and positive engagement with the IAEA as a responsible member of the Non-Proliferation Treaty.

It’s regrettable that the European troika, on the one hand, lends their full support to a regime that possesses hundreds of atomic warheads and is not committed to any non-proliferation regime and, on the other hand, wages a propaganda campaign against Iran’s peaceful nuclear programme, which has been subject to the most meticulous inspections, Kanaani emphasised the need to avoid politicising the nuclear matter and making unfounded accusations against Iran.

The foreign ministry spokesman also warned the European nations against using threats in an effort to get them to fulfil their obligations to the Iranian people. Kanaani emphasised that everyone who naively believes they can prevent the Iranian people from fully pursuing their rights and achieving their interests through threats and sanctions must learn a lesson from the US’s maximum defeat in its maximum pressure campaign.

He added emphasis at the end. Iran is still prepared and determined to complete a deal, and it is of the opinion that if the other parties share this outlook and resist outside pressure, an agreement can be reached quickly.