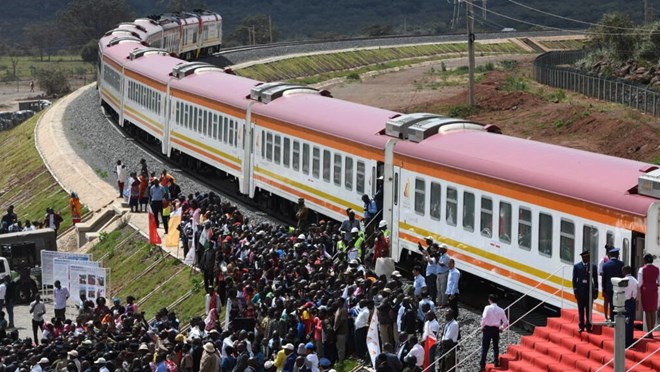 Kenya denied on Thursday that it had stopped paying interest on a loan provided by China for the building of a railway line from the port city of Mombasa, which opened in 2017.

The so-called “Lunatic Express,” a line built more than a century ago by colonial power Britain that was infamous for protracted delays and breakdowns, was replaced by the $5 billion project, which was funded 90% by China.

According to Kenya’s Business Daily, the government was fined 1.312 billion Kenyan shillings ($10.8 million) for failing to pay interest on the loan during the fiscal year that ended in June.

Ukur Yatani, the secretary of the Treasury Cabinet, rejected the report as “misinformation,” claiming that the East African economic giant’s financial position was “sound and robust.”

In a statement, Yatani said, “We wish to state categorically that Kenya has never defaulted on the settlement of its debt service obligations to any of its creditors.

East African leaders launched the Standard Gauge Railway (SGR) as part of a master plan to connect their countries by rail. It is the largest infrastructure project Kenya has undertaken since gaining independence from Britain in 1963.

It is intended to eventually connect Mombasa to the town of Naivasha in the Rift Valley via Nairobi, as well as Uganda, Rwanda, South Sudan, Burundi, and Ethiopia.

Before being turned over to the Kenyan government, the Chinese contractor was to oversee the railway for five years.

However, it has reported losses, and analysts are concerned that the pattern may persist after newly elected President William Ruto last month changed a rule that required cargo to use the railway.

After the World Bank, China is Kenya’s second-largest lender. China has financed a number of expensive infrastructure projects, raising concerns that Nairobi may be taking on more debt than it can handle.

According to government statistics, the nation’s public debt in June totaled 8.6 trillion shillings ($71.1 billion), an increase of 11.5 percent from a year earlier.

However, loan interest payments have increased significantly recently due to the shilling’s sharp decline in value against other currencies. On Thursday, it was trading at 121 to the dollar.

Yatani stated that there was no reason for concern because independent sovereign rating reviews of the nation are frequently conducted and widely disseminated.

He continued, “Kenya has never been reported as defaulting on its external debt obligations.