Kenya receives Sh2.5 billion for the KDF in Somalia. 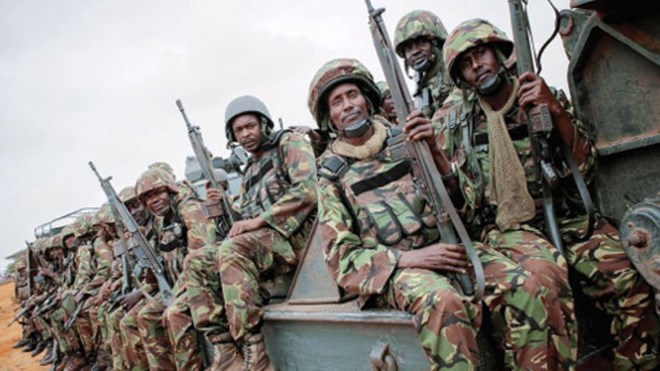 In the nine months leading up to March 2022, the European Union and its partners reimbursed Kenya roughly Sh2.54 billion for troops fighting the Al-Shabaab insurgency in Somalia, falling seven percent short of the target.

The African Union Mission in Somalia (Amisom), whose mandate ended in March, missed its target of Sh2.73 billion by Sh191 million, according to Treasury data.

However, the quarterly disbursements were Sh811 million, or 24.23 percent, lower than the Sh3.35 billion reimbursed in the previous financial year.
After reconfiguring the operations of Amisom, which has been in the war-torn country for about 15 years, the United Nations Security Council approved for a transitory African Union peacekeeping mission in Somalia at the end of March.

Somalia finally conducted a presidential poll on May 15— after being delayed for more than a year— electing former leader Hassan Sheikh Mohamud to serve for four years. Mr Mohamud, who defeated the incumbent Mohamed Abudallahi Farmajo, had previously led Somalia between 2012 and 2017.

Under the Amisom, the EU funds largely catered for allowances for the about 20,000 Amisom troops and police, international and local civilian staff salaries and operational costs of their offices.

The United Nations Support Office in Somalia (UNSOS), on the other hand, provided logistical field support to the Amisom troops and Somali National Security Forces during joint operations.

Kenya formally sent about 4,660 soldiers to Somalia in October 2011 after incessant attacks and kidnapping of civilians by Al-Shabaab militants within its territory, numbers which have since been gradually trimmed.

A year later, the UN Security Council approved Kenya’s membership in Amisom, which meant the Treasury would not be responsible for the entire cost of the incursion.

Last July, Treasury Principal Secretary Julius Muia told MPs that the Kenya Defence Forces’ actions in Somalia are funded by the exchequer, which the Defense Ministry then refunds once the African Union wires the funds.

The refunds are made to the Defence Ministry through the African Union Peace Facility.

According to conservative estimates, the international community pays $1,028 per month for each soldier (Sh119,248 at current exchange rates).

Kenya Defence Forces (KDF), in the book titled “War for Peace: Kenya’s Military in the African Mission in Somalia, 2011-2020″— published May 8, 2020 — suggests that reforming the Somali National Army to take charge of sustainable peace should be the first pillar of the exit plan.