Kibaki, Kenya’s former president, has died at the age of 90. 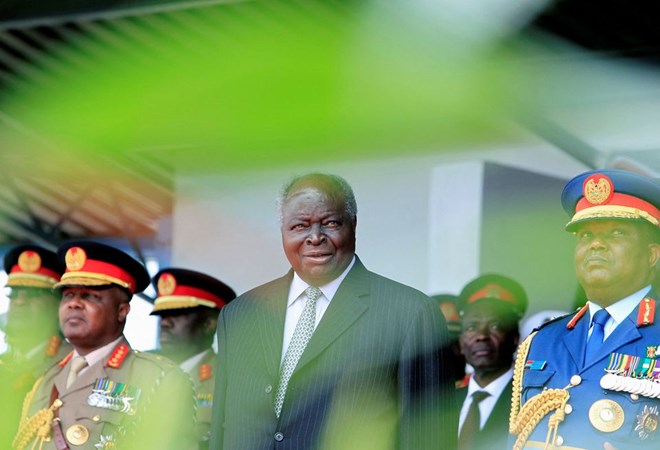 Mwai Kibaki, Kenya’s third president from 2003 to 2013, brought economic reforms and a new constitution to the country but struggled to combat pervasive corruption.

Kibaki, a British-educated economist, hid his political savvy behind his unflappable demeanor, which helped him win the presidency after four decades as a congressman, government minister, and then vice president under his predecessor, Daniel arap Moi.
Kibaki is credited for recovering Kenya’s then-ailing economy, but his tenure was overshadowed by violent unrest that killed more than 1,200 Kenyans following his disputed re-election in December 2007.

When journalists were swiftly evacuated from the electoral commission, the opposition was well ahead. Kibaki was declared the winner by a razor-thin margin hours later. The smoke began to rise almost immediately  from fires lit by protesters.

While announcing Kibaki’s death, Kenyatta recalled his long public service, including being a member of parliament for five decades.
“Kibaki was a quintessential patriot whose legacy of civic responsibility will continue to inspire generations of Kenyans long into our future,” Kenyatta said in a televised address.

Kenyatta did not state the cause of death but Kibaki has been ailing for some time, domestic media reported.
Politicians took a break from campaigning for a general election scheduled for Aug. 9, to mourn Kibaki.
“He stood firmly and laid the foundation for the economic fruits that Kenya is experiencing today,” said Musalia Mudavadi, who is backing Deputy President William Ruto in the presidential contest.

But Kibaki failed to tackle endemic graft, which remains a key demand of voters in the upcoming polls that pit Ruto against Raila Odinga, a former veteran opposition leader now embraced by the political establishment.
Kibaki had also tried to bring peace to regional hotspots, said Moses Wetengula, who served in the cabinet. “As his foreign minister, I ran many missions to stabilise Somalia and other pockets of instability including Congo,” Wetangula said.
Kenyan peacekeepers are still serving in southern Somalia.