Leaders of the NCC have agreed to develop technical committees for security and elections. 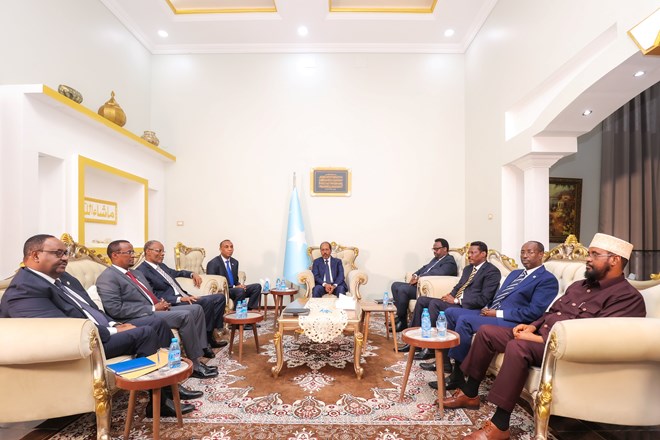 On Wednesday, the National Consultative Council (NCC) meeting in Mogadishu finished, with federal and regional officials agreeing on a five-point communique focusing on security and elections.

The NCC agreed to a political accord on power delineation at the federal and regional levels, but Puntland refused to sign.

The Council has commended the security forces for their ongoing fight against Al Shabaab.

“The NCC has once again praised the military forces’ ongoing efforts to remove extremists from the country with the help of Somalis. The Council thanks the people and authorities of Hirshabelle and Galmudug for their excellent efforts in defeating the Khawarij.”

Federal and regional leaders also hinted that the offensive would soon be extended to Southwest State and Jubbaland.

The NCC decided to create a technical committee to finish the 2017 National Security Architecture, which clarified the size and deployment of security forces, as well as the command and control structures inside and between them. The committee’s leaders agreed that it would be constituted by January 10, 2023, and that it would make recommendations and deliver a full report.

They also decided to form a committee to make recommendations on how to have universal elections in Somalia.

The NCC also commented on the earlier this week’s violent clashes in Baida, appealing for calm and for all sides to uphold the rule of law.