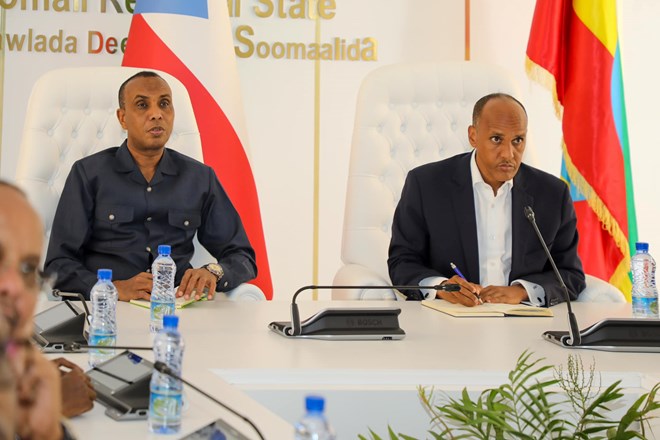 At the Presidential palace in Jigjiga on Monday, Somali Prime Minister Hamsa Abdi Barre and his delegation met with Mustafa Mohamud Omar, the president of the Somali Regional Government in Ethiopia.

The region’s progress was praised by Prime Minister Hamza, who also emphasised the value of close collaboration in battling and eliminating the Al Shabaab.

To stop al-Shabab militants from entering Ethiopia, Mustafe Omar, the president of Ethiopia’s Somali state, declared last July that his government would establish a buffer zone inside of Somalia.

Al Shabaab attacked two villages close to the Ethiopian border during that month, killing 17 people, including three civilians and Ethiopian police officers inside Somalia, while also losing 63 of its fighters.

Al-Shabaab incursion into Ethiopian territory in July, involving about 500 al-Shabab fighters, was successfully repelled by Ethiopian security forces. According to authorities, this was the militant group’s largest operation ever inside Ethiopia.

Following the meeting, the prime minister and his delegation visited a number of locations where local government offices are located, as well as a sizable building that is being built for the parliament.