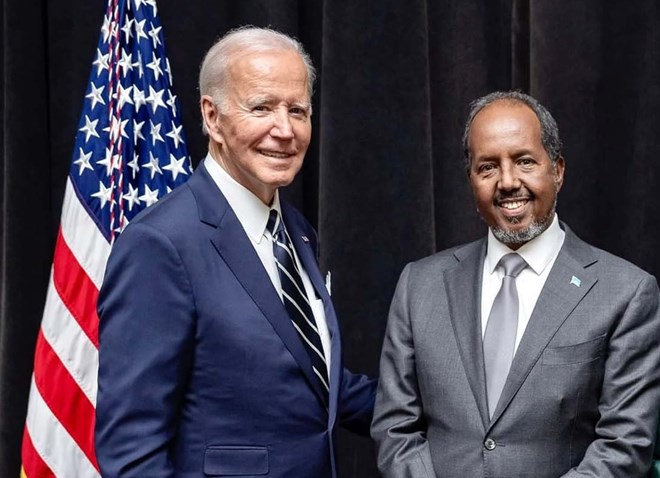 According to sources at Villa Somalia, Somali President Hassan Sheikh Mohamud will likely return to the US in mid-December for a significant African summit in Washington, DC.

Up to 50 African heads of state will attend the U.S.-Africa Leaders Summit, which is scheduled for December 13–15, to discuss a range of global issues, including the recovery of the global economy, food security, and climate change.

In a statement announcing the summit, Biden said, “The summit will demonstrate the United States continuing commitment to Africa, and will underscore the importance of U.S.-Africa relations and increased cooperation on shared global priorities.”

Several African diplomats claimed that the Trump administration’s lack of interest in sub-Saharan Africa caused their relations with the US to deteriorate in recent years.

Trump famously called Haiti and African countries “shithole countries,” banned immigration from several countries with a majority of black people, and never travelled to Africa while in office.

Since taking office, Biden has not yet travelled to Africa, but according to his administration, the summit will provide a platform for interaction and communication.

Under the Obama administration, the US president held a significant conference with African leaders for the first and only time in August 2014. At a time when China was significantly increasing its investments in Africa, trade, investment, and security were the main topics of discussion at the three-day summit that Obama hosted.

The plan is reminiscent of significant China-Africa summits, such as the Forum on China-Africa Cooperation, which was established in 2000 and is regarded as essential to China’s Belt and Road Initiative, its plan for building out the world’s infrastructure.

The current Somali government, which has made it the goal of its foreign policy to strengthen international relationships and its relations with its neighbours, sees the power competition as a benefit.

In contrast, a cornerstone of Biden’s diplomatic efforts has been the promotion of Western democracies as a counterweight to China.

It was a “exciting” time in Somalia, the US Ambassador to Somalia, Larry Andre, told an audience of Somali-Americans during a July visit to Minneapolis. He continued by expressing his dissatisfaction with the recent elections in Somalia, which were marred by widespread claims of fraud and vote-rigging.