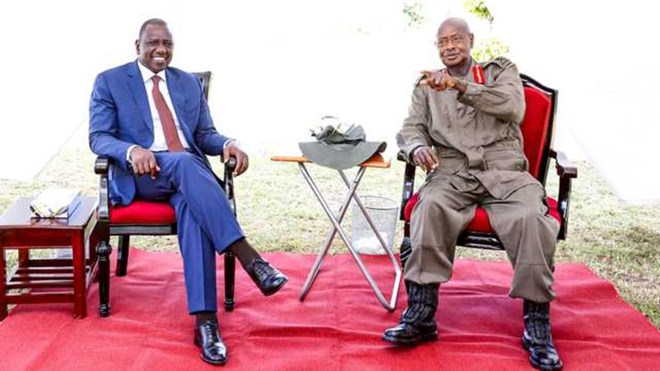 This week, Gen. Muhoozi Kainerugaba either reached a turning point in his political career or strained ties between his nation and Kenya. Depending on your perspective,

Currently, the youngest general in Uganda is 48 years old. However, five other members of the Uganda People’s Defence Forces (UPDF), including his father President Yoweri Museveni, already hold that position. Additionally, this week, President Museveni removed him from his position as Commander of Land Forces, making him a general without an army.

What was the purpose of his contentious tweets, in which he called for an invasion of Kenya in order to seize control of Nairobi in two weeks? After President Yoweri Museveni apologised to Kenya, Nairobi officials publicly declared they would move past the incident. Privately, President William Ruto’s officials were so irate that they threatened to forgo him attending Uganda’s 60th anniversary of independence on October 9 in Kampala.

Dr. Ruto was previously invited to open a business forum in Kampala on Tuesday, but the invitation was not accepted. Nairobi initially discounted the tweets. The general continued to tweet, however, about his purported affection for former president Uhuru Kenyatta, who he bemoaned should have sought a third term (doing so would have violated Kenyan law), his admiration for revolution over democracy, and his desire to unite Kenya and Uganda into “one country.”

Some government officials in Kenya believe that Muhoozi is upset that Ruto won the election rather than Raila Odinga, who had Kenyatta’s support. Nairobi’s diplomats said they were looking forward to “clarification” from Uganda. Ruto’s team announced on Friday that the president would attend the anniversary of the country’s independence.

President Museveni issued an apology for the tweets, but he defended supporting Muhoozi by claiming that he was emphasising positives while downplaying negatives.
He said, “I beg your pardon for the tweets of General Muhoozi, former Commander of Land Forces, to our Kenyan brothers and sisters.

According to the leader of Uganda, it is improper for any public official to make comments about or meddle in the internal affairs of a neighbouring country.

But this also presents Museveni with a challenge: how to control his son while upholding the domestic order and his budding bromance with Ruto. When Ruto ran for office, his friendship with Museveni sparked debate in Kenya, which resulted in a ban on his travel to Uganda. Authorities claimed Uganda had unfairly influenced Kenyan elections, which compelled Kampala to deny any involvement.

On Thursday, Uganda was not specifically named in Raila Odinga’s suggestion that there had been foreign interference in the elections. He claimed that “a group of right-wing politicians and a group of international monopoly capital” were responsible for the election being rigged.

But Museveni views Ruto’s racial ties to some Ugandans in the east of that nation as being more significant than just local elections. According to rumours, Kenya’s president has investments in Uganda, which explains his closeness to the president of that country.

While juggling the succession balls, some claim that Museveni also needs to maintain the happiness of his generals back home. Muhoozi implied in his tweets that he sees himself as the heir apparent.

His confidant, Balam Barugaharra, claims that holding the rank of general is training for the presidency. He claims that they are hoping for his appointment as minister so that he can communicate more with common Ugandans and comprehend their plight.

Barugaharra recently informed the president of western Uganda that Muhoozi was Uganda’s “standby generator” in the event that he decided to resign.

Gen Muhoozi is anticipated to be the featured guest at the Business Breakfast in Kampala on October 12 in what appears to be a formal introduction to the public and business world. The conference is being organised by Kef Uganda, a strange organisation, and is being sponsored by some of the top companies in Uganda, including New Vision, Uganda Breweries, and Uganda Airlines.

However, according to some insiders, the president has had enough of Muhoozi’s antics. Three months ago, at the height of what Ugandans perceived to be a problem in the military, Lt-Gen Peter Elwelu, the deputy chief of the defence forces, issued a standby order class one, which Muhoozi immediately countered. This sparked a meeting in Ntungamo, presided over by the president, where Muhoozi was told to stop tweeting.