Mukthar Robow can persuade Al Shabaab fighters to defect, according to President Mohamud 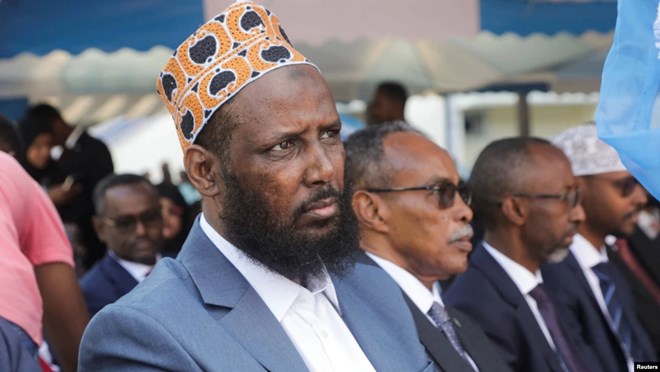 – According to Somali President Hassan Sheikh Mohamud, the federal minister for religious affairs, Mukhtar Robow Abu Mansoor, may be able to persuade some of his erstwhile allies to defect to Al Shabaab.

President Hassan Sheikh stated in an interview with the British daily newspaper, The Guardian, “We want to show the al-Shabaab leadership that if they surrender they will not be abused.”

Mukhtar Robow, a former al-Shabaab co-founder and deputy leader, defected from the Islamist insurgency in 2013 over disagreements with the group’s late leader Ahmed Abdi Godane. In August 2017, Robow formally turned himself in to Somali authorities. Following his unsuccessful bid for the South West State presidency in late 2018, the Somali government promptly imprisoned him. Prior to being appointed as the federal Minister for Religious Affairs by Somalia’s Prime Minister Hamza Abdi Barre, he had been given a three-year house jail sentence for his involvement in political activity.

The new administration in Somalia declared that it will prioritize combating Al Shabaab through a multifaceted “total war” that involves military operations, cutting off their sources of income, and vigorously combating extremist ideology.
Robow believes that active militants will be more receptive to hearing counter-extremist ideology from one of the pioneers of Islamist militant groups in Somalia, despite his insistence that he has long had very public ideological differences with Al Shabaab.

According to President Hassan Sheikh, Robow has set up communication channels with the mid-level Al-Shabaab members and is enticing them to change sides. In order to reach out to active fighters, he continued, the government was employing a “carrot and stick” strategy.