Nageeye and Hailu are the winners of the Rotterdam Marathon. 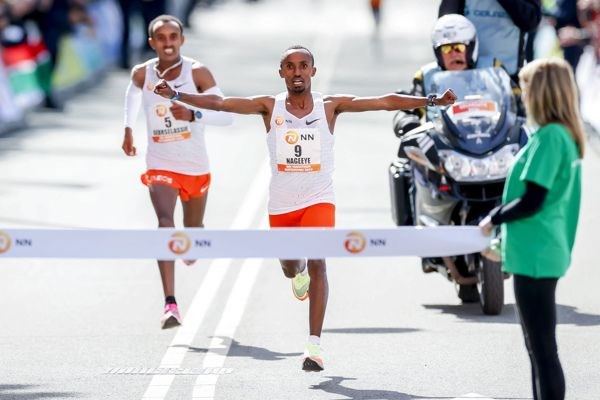 The two races had very different outcomes. In the men’s race, a huge lead pack developed early on, passing through 10km in 29:29 and half way in 1:02:16. However, the pack began to thin out in the second half, and by 30 kilometers (1:28:31), only seven men remained: Nageeye, Olympic bronze medalist Bashir Abdi, Ethiopia’s Leul Gebreselassie, Kenya’s Dominic Kiptarus, Reuben Kiprop Kipyego, Kenneth Kipkemoi, and Philemon Kacheran.

In the last stages, Kipyego and Gebreselassie kept pushing the pace, which was enough to drop most of the remaining athletes in the lead pack. Abdi, who won the postponed Rotterdam Marathon in October last year in a European record time of 2:03:36, began to fade shortly before 40 kilometers, leaving Nageeye, Kipyego, and Gebreselassie to fight for the podium spots.

As Gebreselassie and Nageeye ran for the finish line, Kipyego couldn’t quite keep up with them. Nageeye just squeezed ahead in the end, crossing the line in 2:04:56, over a minute faster than the Dutch record he achieved in the same city in 2019. In second place, Gebreselassie was given the same time, the fifth sub-2:05clocking of his career, while Kipyego took third in 2:05:12, 11 seconds ahead of Abdi.

Haven Hailu of Ethiopia and Daisy Cherotich and Stella Barsosio of Kenya formed an early break in the women’s race, covering the first 10 kilometers in 32:55, well under the course record of 2:18:58 set by 2012 Olympic winner Tiki Gelana ten years earlier.

They couldn’t keep up that pace for much longer, but they still made it to the halfway point in 1:09:56, well under 2:20 pace. Nienke Brinkman of the Netherlands, a relative novice, was over two minutes behind them, running in no-land. man’s

Hailu broke away from Cherotich and Barsosio a few kilometers later. Cherotich hung on a little longer than her compatriot, but Brinkman had moved up to second place by 35 kilometers, which Hailu completed in 1:57:34.

In the last stages, Brinkman gained ground, but Hailu’s lead was secure, and the 24-year-old crossed the finish line in 2:22:01. It was her second-fastest time of her career, behind her personal best of 2:20:19 set in Amsterdam last year, but it was her maiden marathon victory.

Brinkman, who only started running in 2020, finished in second place with a tremendous PB of 2:22:51, beating Lornah Kiplagat’s Dutch record set in 2003. Zhanna Mamazhanova of Kazakhstan finished third in 2:26:54, more over a minute faster than the previous national record set in 1987.