PM Barre has vowed to take action against officials who failed to act during the Hayat Hotel attack. 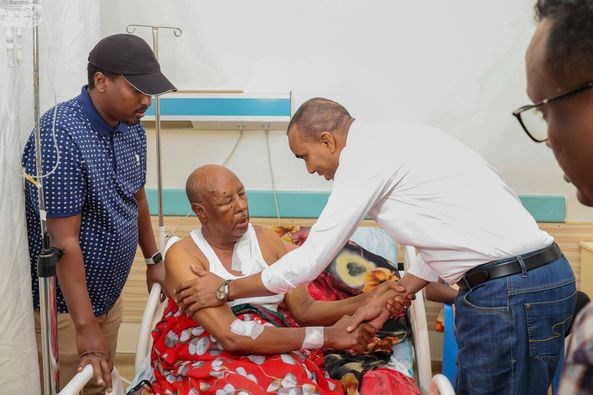 Somai magazine -The government would hold accountable everyone who disregarded their obligations during the weekend’s fatal siege at the Hayat Hotel, according to Somali Prime Minister Hamse Abdi Barre.

Everyone in the government will be held accountable, and those found guilty of discharging a responsibility owed to them will suffer the repercussions.

After touring the hospitals treating the victims of Al Shabaab’s Hotel Hayat attack, the prime minister made the comments.

Hospital staff at Erdogan and Medina gave Prime Minister Hamse an update on the condition of the victims.

The Somali government will pay for treatment overseas for serious ailments that Somali doctors are unable to manage, according to the prime minister.

Following the country’s bloodiest attack since President Hassan Shiekh Mohamud assumed office, the prime minister made his statement. Officially, the hotel attack left 21 people dead and 117 injured, but hospital and ambulance officials think the death toll may be higher.

Mogadishu (HOL) – Somali Prime Minister Hamse Abdi Barre promised that the government would hold accountable anyone who failed to perform their duties during the weekend’s deadly siege at the Hayat Hotel.

“No one in government will be exempt from accountability, and anyone found guilty of failing to carry out a duty assigned to them will face the consequences.”

The Prime Minister made the remarks after visiting the hospitals where Al Shabaab’s Hotel Hayat attack victims were being treated.

Doctors at Erdogan and Medina hospitals briefed Prime Minister Hamse on the status of victims.

The Prime Minister stated that severe injuries that Somali doctors are unable to treat would be treated abroad at the expense of the Somali government.

The Prime Minister’s statement come on the heels of Somalia’s deadliest attack since President Hassan Shiekh Mohamud took office. Officially, 21 people were killed and 117 were injured in the hotel attack, but hospital and ambulance officials believe the death toll could be higher.