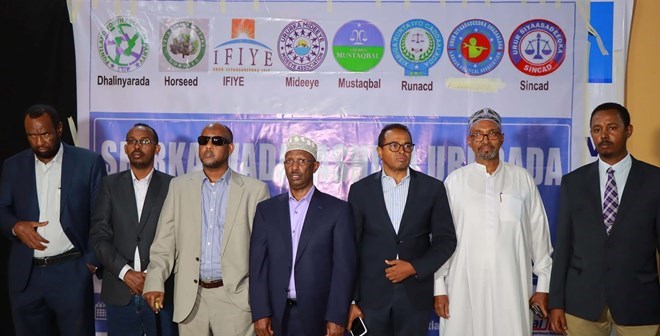 – Puntland’s political parties have stated that they are willing to participate in the upcoming direct elections, but they have attached conditions that must be met before the local polls.
Seven parties –  Dhalinyarada, Horseed, Ifiye, Mideeye, Mustaqbal, Runcad, and Sincad – signed a joint communique following an election meeting in the regional capital.
“The political associations of Puntland have agreed that they are ready to participate in the elections that are free and fair. The registered political associations have emphasized and agreed on the important points below to be implemented before voter registration and election process for Local Counsils is started in Puntland.”
Among the thirteen demands made by the Puntland political parties is to complete the Puntland Constitutional Court and to reduce the number of local councillors in each district.
They also demanded that the region’s political space be expanded by dismantling the system that allows only three political parties to compete in Puntland elections and access to international donor funds for opposition parties.
The Puntland government has yet to respond to the political ultimatum.
Two weeks ago, Puntland’s electoral commission announced polling station locations and voter registration centres for the upcoming direct local government elections.
Share This Post
Facebook
Instagram
Twitter
Youtube