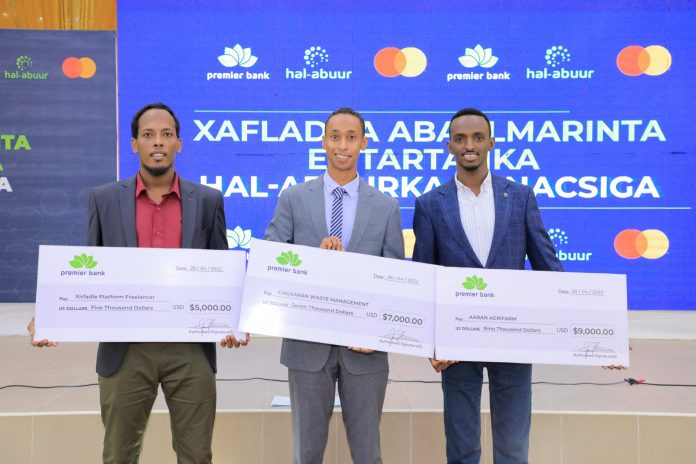 Premier Bank of Somalia held an award ceremony in Mogadishu last night, giving a cash prize of $21,000 to the top three students of the Hal-abuur startup competition, which was held for the first time in Mogadishu this year for the talented and creative university students.

Mr Ahmed Nur Mohamed, the Public Relations Director of Premier Bank, officially opened the event. Mr Ahmed-Nur said 31 students applied to the competition. After preliminary evaluation, 12 startups from 10 Universities became eligible and were shortlisted to participate in the contest. He mentioned that this competition aims to bridge the gap between the young Somali entrepreneurs and access to funds to boost their operations.

The Chairman of the Somali Universities Association, Prof. Mohamed Mohamud Bidey, praised Premier Bank for the competition, which empowers young entrepreneurs of Mogadishu Universities and called on the university students to prepare their students for this annual competition. Mr Abdiaziz Ibrahim Adan, the Ministry of Commerce Director General, closed the event. He commended Premier Bank for supporting talented and entrepreneurial youth and appreciated the Bank for its role in rebuilding the country and supporting these young people to make their dreams come true. It is also a job creation program and a vital contribution to the local economy.

As Somalia is recovering after 30 years of civil war, chaos, domestic violence and political instability, Premier Bank is considering empowering and creating a better future for Somali youths to have their own small-scale businesses and start-up ideas funded and make sure that their dreams are realistic, sound and implementable and that Somalia is a better place to invest and harness resources.

Premier Bank has played a vital role in helping and empowering the youth to realize and believe in their potential to do business as means to be self-reliant. The bank is committed and ready to fully fund the young Somali minds with flourishing and thriving business ideas in the industry.

It’s noteworthy that Premier Bank has held such competition in Hargeisa for the fifth year in a row. This program has benefited many young people and had a substantial positive impact throughout the country since it was established.