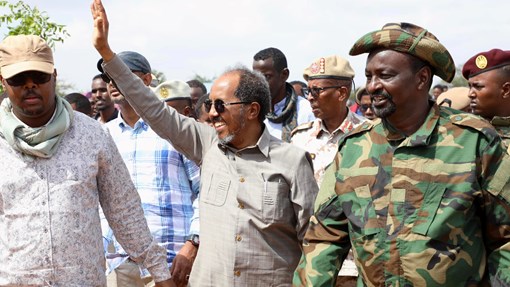 On Sunday, a delegation headed by the president of Somalia, Hassan Sheikh Mohamud, came in Beledweyne, which had recently seen a local community mobilization against al-Shabab in parts of central Somalia.

The President of Hirshabeelle and top regional parliamentarians greeted the group of the President when it arrived at Ugas Khalif Airport in Beledweyne from Dhusamareb, the administrative capital of Galmudug state.

The President and his delegation visited the scene of the double explosion that occurred last month and left at least 20 people dead and 36 others injured, following brief interactions in the airport’s VIP area.

The Lama-Galaay military post, which houses the local government’s offices, the deputy leader of the Hirshabelle state, and the governor of the Hiiraan area, was the target of two explosives-laden trucks on October 3.

President Mohamud and Ahmed Abdi Kariye QoorQoor, the president of the Galmudug State, attended a ceremony to cut the ribbon on the new Galmudug Presidential residence in Dhusamareb on Sunday, November 20, 2022.

On Saturday, ohamud made his first trip to the front lines of the ongoing offensive against al-Shabab in central and southern Somalia. He began in Hiiraan’s Mahas district and then traveled to Bahdo, where he toured army positions and expressed his gratitude to the Somali National Army and the local populace.