President Mohamud has stated that the second phase of the anti-al Shabab battle will commence in South West state. 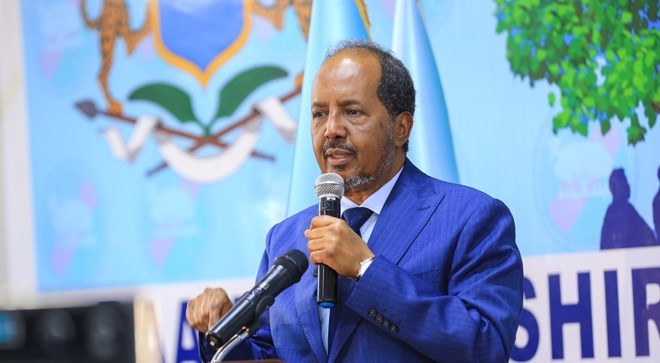 – Somali President Hassan Sheikh Mohamud announced the start of the second phase of the ongoing battle to liberate the country from the al-Shabab group in Somalia’s South West regional state.

At the start of the South West reconciliation meeting in Baidoa on Tuesday, President Mohamud stated that the first phase of the operation against the organization in Hirshabelle and Galmudug states is nearing completion. He stated that the government had prepared a large number of troops to free sections of the country controlled by al-Shabaab.

“The Al-Shabaab militants are the common enemy of all Somalis; they kill men, women, children, the elderly, and every Somali individual. The administration has devised measures to eliminate terrorists; the first phase is nearing completion, and the second phase will begin in Somalia’s Southwest State “According to President Hassan Sheikh.

“We must unify all of our efforts to free our country from terrorist groups draining the people’s blood, posing a threat to the people’s economy, and clogging streets owing to their terror,” the President said.

“If the routes between Mogadishu and Baidoa are cleaned and all terrorists are killed, then no blockage will be tolerated,” President Mohamud remarked.

“We have greater experience than when we originally started the battle in the states of Galmudug and Hirshabelle. We’ve studied al-strategies. Shabab’s Our morale tells us that we will be able to defeat them. The government’s present strategy is to rid the country of al Shabab “He declared this. Somalia’s President is Hassan Sheikh Mohamud.

The President further indicated that Al-Shabaab fighters still have the option of surrendering and being pardoned by the government.

“Under whatever circumstances, follow al-Shabab; I am making it clear to you today that anyone who deviates from al-Shabab will be pardoned. It is not only amnesty; the government has planned better lives for the defectors “Hassan Sheikh Mohamud, President, stated.

President Hassan Sheikh Mohamud has asked parents whose children are fighting alongside al-Shabab to contact them before their children are murdered in ongoing operations.

Since commencing a massive attack last August, the government and allied clan militias have driven insurgents out of large swaths of central Somalia.

Because of the victories, some officials believe al Shabaab is on its last legs.