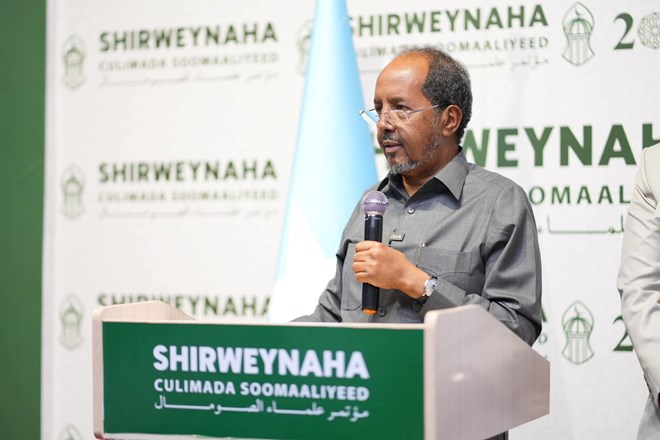 Somali President Hassan Sheikh Mohamud presided over the opening ceremony for a conference of Somali scholars in Mogadishu on Monday aimed at delegitimizing the influence of Al Shabaab.
Prominent scholars and religious leaders from across Somalia are expected to discuss ways to combat the extremist ideology of Al Shabaab with theology.
“The conference of scholars will bring together different thoughts, and I hope it will be productive. Religion is comforting. The scholars will support each other, and the government will support us,” said Sheikh Usuli, one of the famous scholars participating in the conference.
President Mohamud opened the conference with a remembrance of the events of January 23, 1975, when the government of President Siad Barre executed ten religious clerics in Somalia for protesting against a newly enacted Family Law.
President Mohamud said that the religious clerics are instrumental in his plans to defeat the militant insurgency group Al Shabaab,  which he labelled as a Khawarij – an Arabic term used to describe religious deviants.
“The Khawarij war has been going on for a long time and has affected us all. We want to find a solution to eliminate that idea, and the solution is expected from this conference.”
Share This Post
Facebook
Instagram
Twitter
Youtube