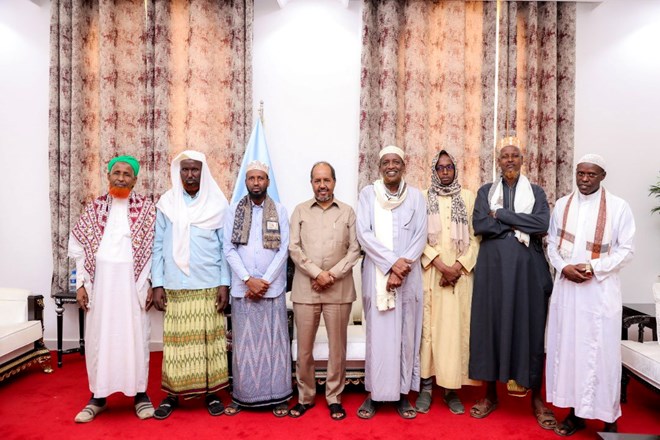 President Hassan Sheikh Mohamud met with religious leaders on Friday during his visit to Baidoa for the South West peace conference, and asked them to play a leading role in fighting the pernicious ideology of the al Shabab.

The Somali President went on to say that religious leaders play an important part in Somalia’s fight against al Shabab, and he complimented sheikhs for their work in settling conflicts and encouraging peace.

The second phase of the current attack against al-Shabab will begin in Somalia’s South West state, according to President Hassan Sheikh Mohamud.

The initial phase of the operation against the gang in Hirshabelle and Galmudug, according to Mohamud, is nearing conclusion. He stated that the government had mobilized troops to free areas controlled by al-Shabaab.

International partners have also praised Somalia’s leaders for their efforts to advance peacebuilding and state-building initiatives, especially through regular meetings of the National Consultative Council.

The international community applauded the renewed emphasis on the constitutional review process, federal resource and power-sharing, and reconciliation, all of which are critical to Somalia’s long-term peace.

“We encourage all parties to participate constructively in these efforts and to work together to address disputes via communication and consultation. We are dedicated to assisting Somalia in attaining its state-building priorities, which will lay the groundwork for a more inclusive, prosperous, and peaceful Somalia “They stated in a Friday statement.