President of the South West meets with international partners in Baidoa 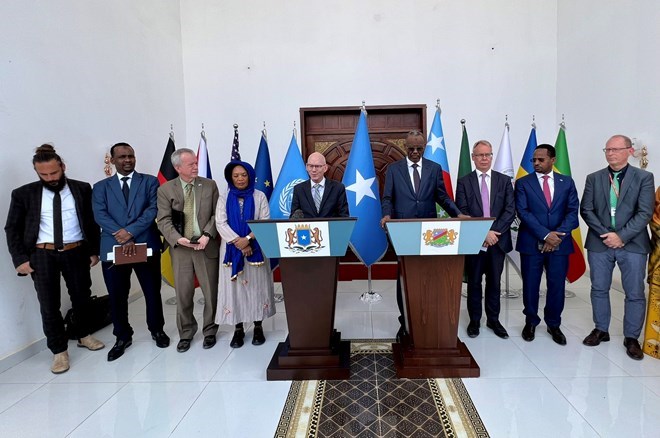 The political, humanitarian, and security developments in South West State and Somalia were examined, as well as the best ways that outside parties may assist Southwest State.

The formation of a District Council in Hudur, which had just taken place, was welcomed by the international partners, according to UN ambassador James Swan, who was speaking to the media in Baidoa.

The UN Secretary-Special General’s Representative for Somalia James Swan  said, “We stressed the importance of ensuring that people are accorded the space to express themselves freely, including freedom of assembly, organization, and media, as the people of South West State debate key issues on the public agenda.”

The growing humanitarian situation afflicting South West State people and others who have moved there due to the drought’s displacement has drawn grave concern from Somalia’s international allies.

“Mr. President, South West State continues to place a high focus on security. We applauded your sustained efforts to weaken Al-Shabaab in all three South West State regions during our meeting today, Mr. President. In tackling the challenge, we also reiterated our dedication to keeping a tight working relationship with South West State’s security organization. In light of this, we call for even closer coordination between global and local security actors “James Swan, the Special Representative of the UN Secretary-General for Somalia, said.