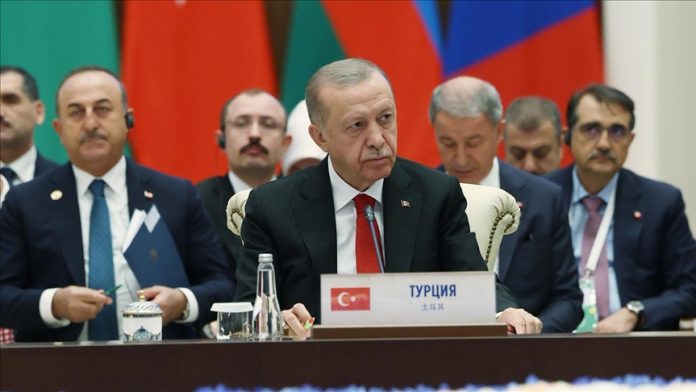 According to Turkish President Recep Tayyip Erdogan, Ankara is making “sincere efforts” to resolve the Ukrainian crisis and allow grain to be exported to Africa.

At the second session of the Shanghai Cooperation Organization (SCO) summit in Samarkand, Uzbekistan, Erdogan stated that “we make sincere efforts to ensure that grain reaches those who need it most, especially our brothers and sisters in Africa.”

He added that Turkey is making “considerable efforts” to resolve the Ukrainian conflict diplomatically as soon as possible.

Erdogan is a special guest at the 22nd SCO Council of Heads of State meeting, where Türkiye is participating at the presidential level for the first time since Ankara was granted SCO dialogue partner status  in 2012.

Together, Turkey and the regional bloc will advance their cooperation, according to Erdogan, who also noted that Ankara is working to improve ties with Asia on all fronts.

This location has evolved into one of our windows to Asia as a result of our status as a dialogue partner over the past ten years, he said.

The president went on to say that Turkey, which devotes about 1% of its gross domestic product to humanitarian aid, is “the most generous nation” in the entire world.

With a diplomatic strategy that puts people and human values at its core, we seek to bring about peace in our region and beyond, he declared.

Erdogan took part in a family photo session at the summit as well.

Later on in the day, the Turkish president will meet separately with other world leaders, including Vladimir Putin of Russia.

Erdogan met privately with the leaders of China, Azerbaijan, Mongolia, Pakistan, and India on the sidelines of the summit. These individuals included Presidents Xi Jinping of China, Shehbaz Sharif of Pakistan, and Narendra Modi of India.

The eight-member organisation, which was founded in 2001, aims to increase mutual trust and goodwill between its member states.