Putin accused the CIA of fomenting the assassination of Russian journalists in Ukraine. 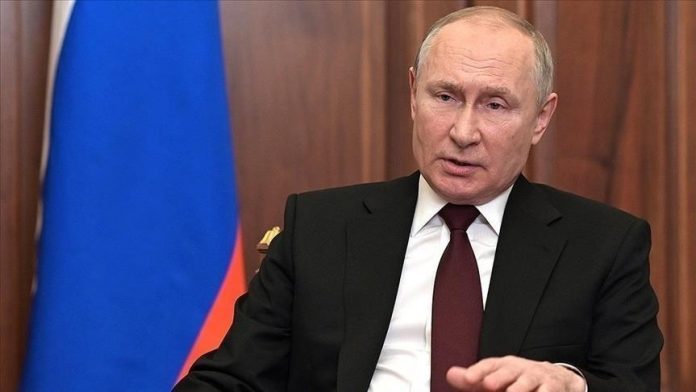 President Vladimir Putin claimed on Monday that Russia is aware of the CIA spies who reportedly advised Ukrainian saboteurs to kill Russian journalists.

“We know the curators of the Ukrainian Nazis by name from Western services, notably the US CIA, who give such counsel as the assassination of (Russian) journalists,” Putin stated at a meeting of the Prosecutor General’s Office Board in Moscow.

He claimed that the West is fighting Russia with its monopoly on information space, but that it is having little success, so it has resorted to “open terrorism.”

“The (Russian) Federal Security Service disrupted the activities of a terrorist gang that planned to assassinate a well-known Russian television journalist this morning. Of course, they will now deny it, but the facts and proof are unmistakable “he says

In recent decades Russia itself has been accused of killing a score of journalists, along with opposition figures and anyone seen to threaten Putin’s rule.
Putin then expressed surprise over a statement by European diplomats calling on Ukraine to win the war with Russia on the battlefield.
“To our surprise, high-ranking diplomatic workers in Europe and the United States are calling on their Ukrainian satellites to use all their capabilities to win on the battlefield. What a strange diplomacy of our partners in the US and in Europe,” he said.
“But as they realize that this is impossible, another task comes to the fore – to split Russian society, to destroy Russia from the inside. But even here there is a hitch – it won’t work.”
Threats said to come from abroad

Putin instructed the Prosecutor General’s Office to fight against “extremism,” “decisively stop any actions aimed at interfering in Russia’s internal affairs from outside,” directed at such goals as the destabilization of society, incitement of xenophobia, or militant nationalism.
Putin also called for an immediate response to the spread of “radical ideology” on the Internet, fakes, and provocations of public order and the preparation of illegal actions, which according to him are “often organized from abroad, either the information comes from there, or the money.”

“The blatant provocations against our armed forces, including using the resources of foreign media and social networks, also require a thorough investigation,” he urged.
With Russia itself facing many accusations of war crimes in Ukraine, Putin also ordered a probe of “mass facts of gross violations of the norms of international law by neo-Nazi formations of Ukraine (and) foreign mercenaries.”
“We’re talking about the killing of civilians, the use of people, including children as human shields, and other crimes,” he explained.
At least 2,435 civilians have been killed and 2,946 injured in Ukraine since the war began Feb. 24, according to UN estimates, with the true figure believed to be much higher.
More than 5.1 million Ukrainians have fled to other countries, with over 7.7 million more internally displaced, said the UN refugee agency.