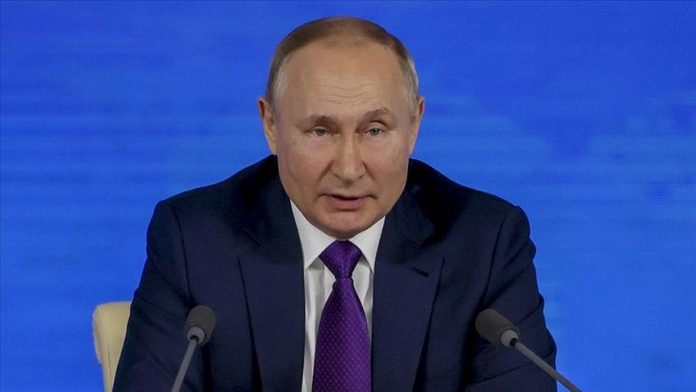 Russian President Vladimir Putin listed six options for selling Ukrainian crops on Friday, as well as his thoughts on the causes of a worldwide food crisis.

In an interview with the Rossiya 24 TV channel, Putin dismissed claims that Russia is to blame for the global food crisis as “another attempt to shift the blame to someone else.”

“First, the global food market situation did not worsen yesterday, nor did the commencement of Russia’s special military operation in Ukraine’s Donbas. During the efforts to combat the coronavirus epidemic in February 2020, when the world economy was down and needed to be revitalized, the situation took a turn for the worst “He made a point.

Putin recalled that back then, the US financial and economic authorities printed large amounts of money to support the population and certain businesses and economic sectors; in less than two years, the money supply in America grew by 38,6% or $5.9 trillion, which led to the inflation and increase in food prices.

“Apparently, the US financial authorities proceeded from the fact that dollar is an international currency and as it was before it would spread throughout the world economy and in the US it (printing large additional amounts of money) won’t be noticeable,” the president said.

However, it happened to be a mistake, as the US secretary of the treasury recently admitted, he continued.

The second reason, according to Putin, is the short-sighted energy policy of the European authorities, who tried to force the transition to green energy without having a proper preparation ground for that.

“Banks, being pressured, stopped giving credits (for development of traditional energy sectors). Insurance companies stopped insuring the relevant contracts. The local authorities stopped providing plots for the development of the (energy) industry and reduced the production of specialized transport. All this led to underinvestment in the global energy sector, and as a result – an increase in prices,” Putin noted.

The refusal of the European authorities from long-term contracts on gas deliveries caused the rise in prices as well, and not only on the hydrocarbons but also for fertilizers, because part of them is produced using gas, and further — to the increase in the food prices.

Finally, the US and EU imposed sanctions on the export of the Russian and Belarusian fertilizers, the US then lifted them, but the EU did not, Putin said.

Taking into account that Russia and Belarus have about 45% share of the global market of fertilizers, the news about their ban induced the spike in prices for the rest of the dressing and consequently in prices of food.

“One thing clings to another, and Russia has absolutely nothing to do with it. Our partners have made a lot of mistakes themselves, and now they are looking for someone to blame, and, of course, in this sense, Russia is the most convenient candidate for this,” he said.

Putin called “a bluff” Ukraine’s capabilities to provide to the global market enough grain to prevent the food crisis.

He cited the UN data, according to which approximately 800 million tons of grain and wheat are produced annually in the world.

Ukraine’s export potential mounts to 20 million tons or 2,5% of that volume, but as of today, the country is only capable of exporting some five-six million tons, which is a very small amount.

Besides, Russia does not prevent export, and there are several ways to export grains, the Russian president noted.

“The first. Please, it is possible to export through ports that are under the control of Ukraine, primarily in the Black Sea basin — Odesa and nearby ports. We didn’t mine the approaches to the port – Ukraine mined it.

“The second. There is another possibility, the ports of the Sea of Azov — Berdyansk, Mariupol. They are under our control, but we are ready to ensure trouble-free export, including the Ukrainian grain, through these ports.

“The third. It is possible to export grain from Ukraine through the Danube and through Romania.

“The fourth. It is possible through Hungary.

“The fifth. It is possible through Poland. Yes, there are certain technical problems there, because the railway is different, it is necessary to change the carts. But it’s just a matter of a few hours, and that’s it.

“And, finally, the simplest thing is the export through the territory of Belarus. The easiest and cheapest, because from there directly to the ports of the Baltic states, to the Baltic Sea and further — to anywhere in the world.