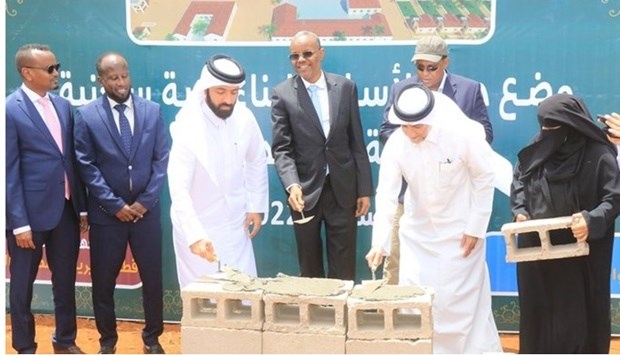 In Baidoa, Somalia, Qatar Charity has laid the cornerstone for an integrated residential village for the displaced.

The village has 67 homes, a health facility, a primary and middle school, a mosque, a centre for vocational training, an artesian well, and a place where people can memorise verses from the Holy Quran. More than 12,000 displaced people in Baidoa, in the Somali province of Bay, are anticipated to benefit from it.

In his speech, Abdul Aziz Hassan Mohamed, the president of the Southwest State of Somalia, praised Qatar Charity for playing a trailblazing role in addressing the needs of the displaced and the affected by saying that “the construction of the residential village will ease the burdens on thousands of families who have been displaced from their homes and villages due to drought.”

According to Nawaf Al Hammadi, Assistant CEO of the International Operations and Programs Sector at Qatar Charity, Baidoa, the second-largest city in which the displaced live, was chosen as the site for an integrated village to support displaced families suffering from malnutrition and a lack of essential services, as well as to lessen their suffering by improving their living and housing conditions and by creating a suitable learning environment.