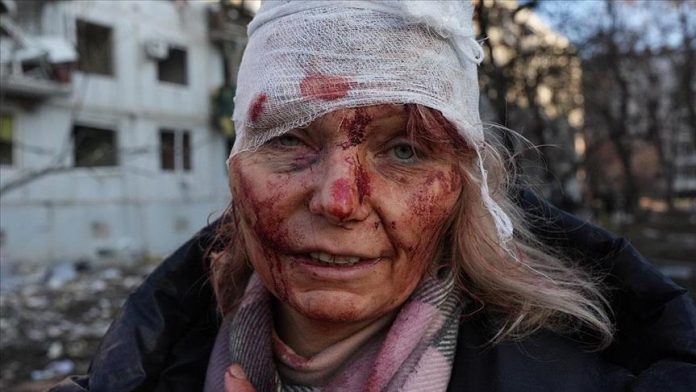 The explosions started after 4.50 a.m. local time (0250GMT) in the Ukrainian cities of Kharkov, Kramatorsk, Mariupol, Mykolaiv, and Odessa, as well as the capital city Kyiv, all under attack by Russian forces.

Amid several explosions in Kyiv, alarms were heard all around the city, warning the public to seek shelter from Russia’s long-feared intervention.

While some civilians tried to leave the city, others took shelter in subway stations and basements.

An apartment complex in the northeast city of Kharkiv was damaged by the Russian attacks. At least one person was injured, and another at the scene was lying on the ground.

Ukraine’s State Border Guard Service announced that Russia had launched an attack on Ukraine from Belarus to the northwest as well as from the occupied peninsula of Crimea, which Moscow illegally seized in 2014.

The statement said the attack was carried out by Russian forces supported by Belarus.

It added that border troops were attacked and that there were also attacks in the cities of Luhansk, Sumi, Chernihiv, and Zhytomyr, all areas along Ukraine’s eastern and northwestern borders.

Ukrainian President Volodymyr Zelenskyy on Thursday announced martial law across the country as Russian troops crossed the border and hit targets around the capital Kyiv.

In a video posted on Telegram, Zelenskyy said Russia had launched strikes against Ukrainian military facilities and border guard units.

“Explosions were heard in many cities of Ukraine. We are declaring martial law across the country,” he said.

“Peaceful Ukrainian cities are under strikes. This is a war of aggression. Ukraine will defend itself and will win. The world can and must stop Putin. The time to act is now,” Dmytro Kuleba said on Twitter.

In recent months Russia had amassed over 100,000 Russian troops around Ukraine, but repeatedly denied any intention of invading.

At least five Russian aircraft and one helicopter were shot down, Ukraine’s Joint Forces Command announced on Thursday.

“On Feb. 24, five aircraft and a hostile helicopter were shot down near the area of the Joint Forces,” the command said on Facebook.

“The Joint Forces give a worthy rebuff to the armed forces of the Russian Federation,” said the statement.

Saying that Ukraine’s military units are holding their positions, the command added that “the enemy is suffering losses.”

“Keep calm and believe in Ukrainian defenders. Let’s win together!” it concluded.