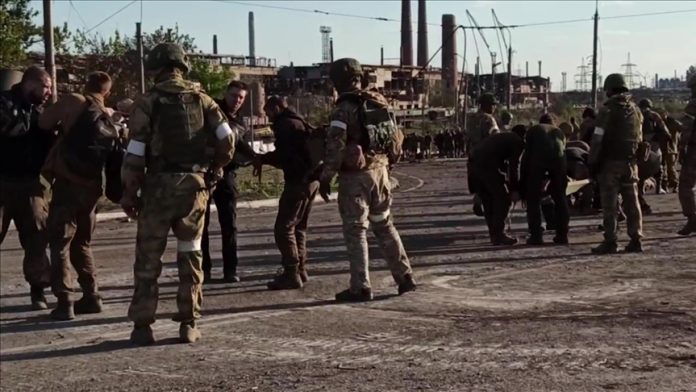 On Wednesday, the Russian Defense Ministry stated that 959 Ukrainian soldiers surrendered at the Azovstal steel complex in Mariupol, which is under siege.

At a press conference in Moscow, spokesman Igor Konashenkov said there were 80 wounded servicemen among them, with 51 requiring hospitalization.

According to him, all of the injured were taken to hospitals and treated.

“Russian air defense shot down a Ukrainian Su-25 aircraft over the Donetsk People’s Republic’s Tripolye villages. A Ukrainian Air Force MiG-29 was also shot down near the village of Kamennaya Yaruga in the Kharkiv region “he stated.

Two more Ukrainian fighter jets and one S-300 air defense system were hit by the Russian Aerospace Forces, he added.

Also, rocket troops and artillery hit 76 control points, 421 areas of concentration of manpower and military equipment, as well as 147 artillery and mortar units in firing position, and a pontoon crossing, built by the Ukrainian Armed Forces to force the Seversky Donets River.

“In total, since the beginning of the special military operation, 172 aircraft, 125 helicopters, 927 unmanned aerial vehicles, 311 air defense systems, 3,139 tanks and other armored combat vehicles, 389 multiple rocket launchers, 1,548 field artillery and mortar guns, as well as 2,997 units of special military vehicles have been destroyed,” he said.

At least 3,572 people have been killed and 4,062 injured in Ukraine since the start of the war on Feb. 24, according to UN estimates. The true toll is believed to be much higher.