Russia’s draft resolution on Ukraine is rejected by the United Nations Security Council. 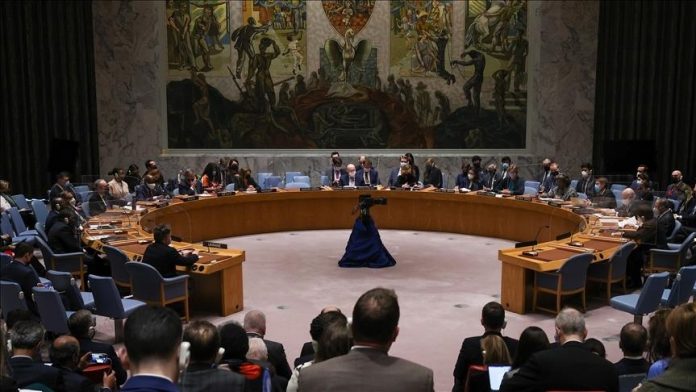 On Wednesday, the United Nations Security Council overwhelmingly rejected a Russian draft resolution on the humanitarian situation in Ukraine.

Only China and Russia voted in favor of the text, with the remaining 13 chamber members abstaining.

The draft resolution expresses “grave concern” about the “deteriorating humanitarian situation in and around Ukraine,” citing an increase in the number of internally displaced people and refugees as examples.

While it condemns “all violations of international humanitarian law and violations of human rights,” the text does not assign blame for the war.

US envoy to the UN Linda Thomas-Greenfield said the draft was an attempt by Russia to “provide cover for its brutal actions” in Ukraine ahead of the vote.

“”It’s unconscionable that Russia would put forward a resolution asking the international community to solve a humanitarian crisis that Russia alone caused,” she said.

“They want us to pass a resolution that does not acknowledge their culpability,” she added. “Russia is the aggressor, the attacker, the invader, the sole party in Ukraine, engaged in a campaign of brutality against the people of Ukraine.”

Before the vote, Moscow’s permanent representative, Vassily Nebenzia, hinted that Russia’s resolution was likely doomed to fail “The premise of the argument is categorically rejected by us.

“This is something that UN humanitarian representatives on the ground would be much more interested in than any General Assembly humanitarian resolution,” he said.

He was most likely referring to a General Assembly vote on a resolution that would condemn Russia for the war for the second time. The assembly did so for the first time on March 2.

The new resolution, which could be voted on as early as Wednesday, once again names Russia as the aggressor and reiterates its demand that the offensive be halted immediately.

The European Union, the United States, and the United Kingdom, among others, have imposed tough financial sanctions on Russia as a result of its war on Ukraine, which began on February 24.

According to UN estimates, 977 civilians have died and 1,594 have been injured during the war.

According to the UN refugee agency, more than 3.6 million people have fled Ukraine to neighboring countries.