Sadak John is given full ranks by President Hassan Sheikh 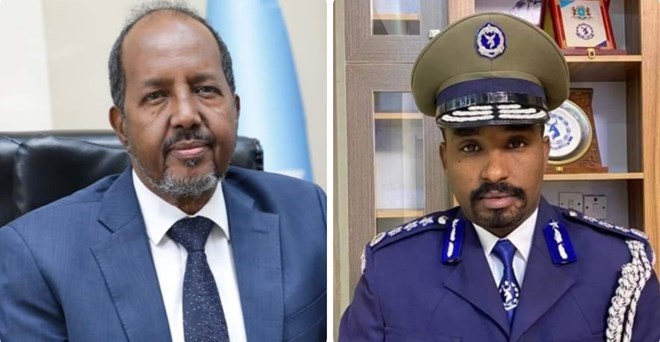 – A former Banadir Police Commissioner who was fired in April for directing lawmakers to abstain from a vote that attempted to extend the previous administration’s term by two years has been rehired by Somali President Hassan Sheikh Mohamud.

Sadak Omar (also known as Sadak John), who was elected to the legislature earlier this year, has been promoted to Brigadier General.

President Hassan declared, “Senior General Saadaq Omar Mohamed, as of today I issued this presidential decree, he has the right to all the rights of the forces that the law allows, and this decree eliminates all the laws that preceded it.

On the morning of a contentious parliamentary vote to prolong former President Mohamed Abdullahi’s term for two years, Sadak John was fired by Somali Police Commissioner Gen. Abdi Hassan Mohamed Hijar in April, when the nation was experiencing an election crisis.

On Universal TV, Sadak John declared that he was suspending the legislative session and gave the members of parliament the go-ahead to leave the building. He reprimanded MPs for asking for an extension in a direct address to MPS and advised them to seek a fresh mandate through indirect elections.

Sadak was abruptly fired through Twitter less than 30 minutes later.
Hassan Hundubey Jimale, Somalia’s security minister, denied rumours that the government was about to take action against the former Banadir regional police chief after tensions in Mogadishu’s Shirkole neighbourhood rose days after the dismissal.

Up to 100 armed men were stationed around Sadak’s home to protect him from any government assault.

One of the most prominent opponents of the two-year extension in Somalia was President Hassan Sheikh Mohamud, who referred to it as “illegal” and a “power grab.”

Since being fired, Sadak John has maintained a low profile, but in July 2022, he reappeared in Galmudug with Federal and State soldiers.

In January 2022 , John was voted to HOP24 as Galmudug’s representative.