Sakaryaspor, which has been promoted to the Spor Toto 1st League, has reverted to its former glory. 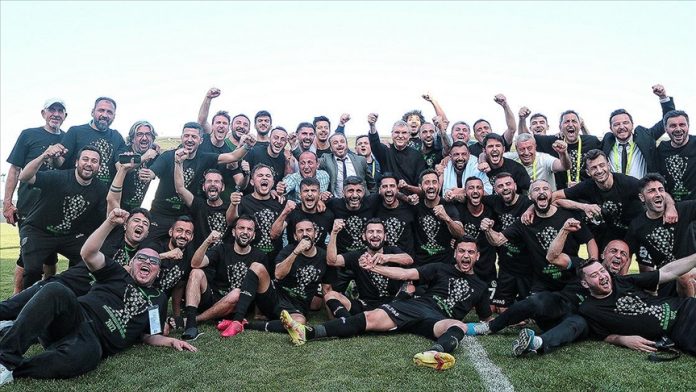 Having guaranteed promotion to Spor Toto 1st League with 2 weeks before the end of the league in TFF 2nd League Red Group, Sakaryaspor is experiencing the happiness of ending 10 years of longing.

“Anadolu Güneşi” Sakaryaspor, which has a Turkish cup in its past, won many stars for Turkish football, and stayed in the league with an average difference in the last match of the 3rd League, left the bad days behind and rose to the 1st League, where it last fought in 2011-2012.

The green-black team, which started the season with the goal of championship, could not get the desired results in the first 8 weeks and found itself in the 7th place with 14 points collected.

Sakarya representative started to rise by getting 10 wins and 1 draw in 11 games as of the 9th week of the league. Coming to the top in the 13th week of the league, Sakaryaspor maintained its leadership for 23 weeks and secured the promotion to the Spor Toto 1st League, 10 points ahead of its closest rival, two weeks before the end of the league.

Having aired the opponent’s nets 74 times and scoring 23 goals in its goal, Sakaryaspor is the team with the highest average in the league with 51.

3. League adventure
Sakaryaspor, one of the deep-rooted teams of Turkey, was relegated from the Spor Toto 1st League in the 2011-2012 season, where it competed last.

Competing in the TFF 2nd League with economic difficulties in the 2012-2013 season, the Sakarya representative finished the league in the last place with 21 points and regressed to the 3rd League.

Sakaryaspor managed to hold on to the league with the goal difference by drawing a draw in the last match of the 2013-2014 season, when financial difficulties continued.

Sakarya representative, who started the 2014-2015 season with the password of championship by removing the transfer ban, finished the league in the 3rd place with 57 points and participated in the play-offs.

Sakaryaspor, which passed its rival Metropolitan Belediye Erzurumspor in the play-off semi-finals, lost to Ankara Demirspor in the final and returned from the gate of the 2nd League.

Sakaryaspor, not getting the desired results in the 2015-2016 season, finished the league in the 12th place.

The green-black team, which started its 4th season in the 3rd League in the 2016-2017 season, finished the league in 2nd place and earned the right to participate in the play-offs again.

Eliminating its rival Bayrampaşa in the play-off semi-finals, Sakaryaspor defeated Diyarbekirspor in extra time, which it faced in the final, and advanced to the TFF 2nd League again after 4 seasons.

Saddened team of the finals: Sakaryaspor
Sakaryaspor lost 3 finals during the 5 seasons it played in the 2nd League, and returned from the gate of the Spor Toto 1st League.

Completing the 2017-2018 season in the 5th place and participating in the play-offs, Sakaryaspor passed Bandırmaspor in the quarter-finals and Gümüşhanespor in the semi-finals.

Losing 2-1 to Afjet Afyonspor in the final, Sakaryaspor left its 1st League hopes for the next season.

Ranking 4th in the 2018-2019 season, Sakaryaspor eliminated Samsunspor and Sarıyer in the play-off quarter and semi-finals and reached the finals.

Losing 2-0 to Fatih Karagümrük in the final, Sakaryaspor returned from the gate of the 1st League for the second time in a row.

Sakaryaspor closed the 2019-2020 season in the 5th place and was eliminated by losing to Ankara Demirspor in the quarter-finals of the play-offs.

Completing the 2020-2021 season in the 2nd place, the Sakarya representative surpassed Silahtaroğlu Van Sports Club and Kırşehir Belediyespor in the play-offs and advanced to the finals.

Losing 4-0 to its neighbor Kocaelispor in the play-off final, Sakaryaspor left its 1st League hopes for the next season, and lost 3 finals in 5 seasons in the 2nd League.

“Anadolu Güneşi” Sakaryaspor, who has been promoted to Spor Toto 1st League with 2 weeks before the end of this season, is aiming for new successes by leaving behind the difficult process it has been through.