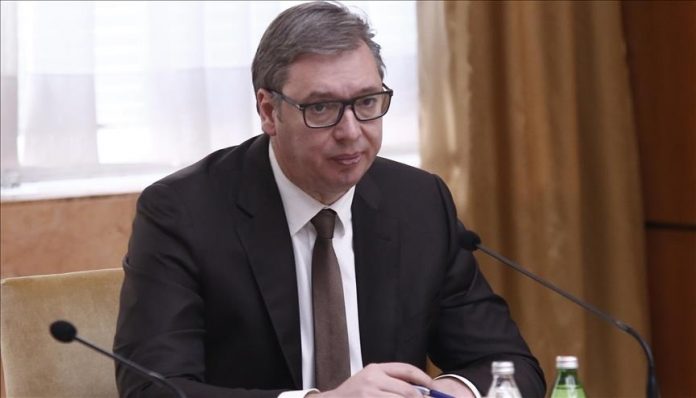 “Biljana Stevanovic was removed from the Kosovo institutions of Serbian judges today at the request of Albin Kurti. The dismissal of all Serbian commanders and police officers present at the National Security Council session was planned for the following morning “In a video posted on social media late Thursday, Aleksandar Vucic said.

“Kurti broke the Brussels agreement, and the Brussels agreement no longer exists due to his will and the will of those who protect him. Kurti is the one who wants to destabilize Kosovo and Metohija’s peace process. He intends to attack Serbians wherever they live with these decisions “he stated

Vucic warned the Quintet — France, Germany, Italy, the United Kingdom, and the United States — as well as the international community that Serbia wants to keep the peace.

Vucic concluded his extraordinary address via video on Instagram by saying, “Whatever you do, Serbia will be with its people.”

The Brussels Accord is no longer in effect.

“Brutal violence against Serbs continues in Kosovo and Metohija. With each new decision Kurti makes, he jeopardizes peace and stability. Agreements made at the international level are being broken. Their fundamental human rights are being revoked. As a result, the Brussels Agreement is dead,” Brnabic said.

Kosovo had previously announced that Serbs in Kosovo would be unable to vote in the Serbian presidential and parliamentary elections scheduled for April 3.

Then, on March 22, President of the Mitrovica Court, Serb-origin Ljiljana Stevanovic, met with Vucic at the National Security Council in Serbia.

“Serbs in Kosovo want to hold protests in the coming days. I understand; this is their democratic right, and I am powerless to intervene “Vucic stated.

Stevenovic, who attended the council meeting in Serbia, has been suspended by the Kosovo government.

Kosovo was chastised by France, Germany, Italy, the United Kingdom, and the United States for denying Serbs of Kosovo citizens the right to vote in the elections.

“Kosovo’s government has failed to demonstrate its commitment to the principle of protecting the civil and political rights of all citizens, including members of minority groups, with this decision. The Kosovo government’s attitude is like this.

The convoy of ROSU armored vehicles set off Friday from Pristina to the north of Kosovo and Metohija.

Protests by Serbs in Gracanica in Kosovska Mitrovica are scheduled due to Kurti’s decision.