Mogadishu, Somalia – Mumtaz Ahmed looks and sounds overwhelmed. For three weeks, she has been searching for an apartment to rent in the Somali capital, Mogadishu, for her young family of three. The few properties on the market are either too expensive or owners ask for a large deposit upfront.

“I’m looking for two to three-bedroom apartment in this area and it is proving impossible,” the mother-of-one told Al Jazeera as she sat in the waiting area of an estate agency in the Waberi district of the city.

“Sometimes even paying a deposit does not secure you the property you want. Mogadishu of today is not Mogadishu of [a] few years ago,” Mumtaz adds as more would-be tenants trickle in the small waiting area.

With a budget of $350 a month, Mumtaz is not too hopeful. “Three or four years ago, I will have found a four-bedroom villa in the nicest area of the city with that money,” she said.

Since August 2011, when the al-Qaeda-linked armed group al-Shabab was pushed out of the seaside city, the Somali capital has been enjoying the relative calm. The city’s skyline is changing fast with brand new multistorey apartment buildings replacing the bullet-scarred houses.

Sounds of hammers and cement mixers are a common feature for residents of the city. “If you look anywhere in Mogadishu, you will see they are building new apartments. But that has not made it cheaper or affordable,” Mumtaz said.

With the armed group out of sight and a shaky political truce holding between the warring elites, people are flocking back into the city.

Properties are snapped up even before they come onto the open market. Some residents are even inking multi-year agreements to secure properties in their favoured part of the city.

Ibaar Osman Ibrahim woke up early to make the rounds at the different estate agencies in downtown Mogadishu. The 27-year-old electrical engineer is hoping to find a suitable villa to rent.

“I’m looking for a four-bedroom villa ideally in Waberi district,” Ibaar told Al Jazeera. “This area is even more expensive than other areas because it is favoured by government employees. It is safer for them than many other parts of the city.”

“I will be very lucky if I find something for $400 a month. Every month, the asking price is going up. Our salaries have hardly gone up which makes it difficult,” he added.

The rent excludes utility bills with the East African country having one of the most expensive electricity tariffs in the world.

“Those of us who are lucky to have a good paying job, we spend 60 percent of our salary on rent and another 20 percent on bills,” he said.

Real estate developers are especially happy with the booming market.

Ismail Ali Toohow saw an opportunity in the market two years ago. He now owns and manages Kiro Sheeg real estate agency, with multiple offices in the city.

“In this office, we see a minimum of 50 people seeking properties to rent,” the father-of-three told Al Jazeera. “There is huge demand. Asking price has gone up by more than a third in the last two years even with the pandemic.”

For every tenant he finds a property, he charges them a $100 fee.

“Sometimes people are willing to pay you money just so that you call them if and when a property comes onto the market. They want to beat the competition. Going into this business is the best decision I have made,” the 30-year-old said smiling.

Investment by the country’s sizeable diaspora has been flowing back pushing prices even higher. They prefer to buy land and build apartments.

Off Maka al-Mukarama road, the city’s main thoroughfare, a group of young men are busy typing away and taking orders on the phone in a two-room office equipped with sleek computers. They work for Bile Home Repairs and Construction Services, one of the leading construction companies in the city.

“Most of our clients are diaspora and business people,” Bile Mohamud Dhoore, its CEO, told Al Jazeera.

“Every month we break ground on at least seven properties. In 2019, we used to do one, if we were very lucky may be two properties. For most of our clients, it is purely for investment purpose. There is confidence in the market at the moment,” Bile, 42, added.

But the demand cannot keep up with the supply, he said. 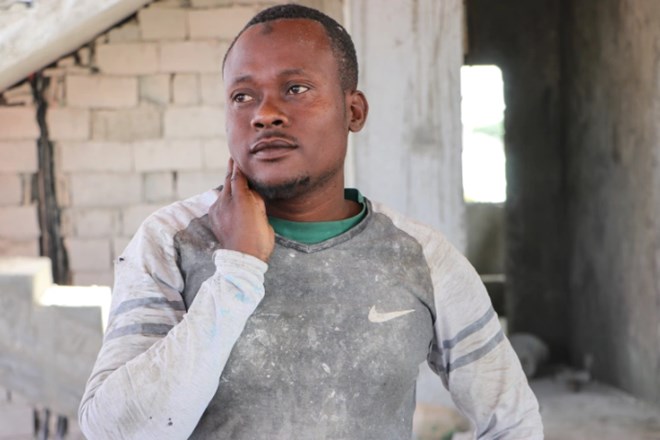 The coronavirus pandemic has also had a hit on the market with the price of construction materials increasing considerably. This increase is passed on to the tenants when the property is finished.

With the prices going sky-high, many are choosing to either move to the outskirts of the city or even to nearby towns, coming to Mogadishu in the morning and heading home at night.

Anas Jeylani used to live in Mogadishu but says the city has become unaffordable for him and his family. He moved to Afgoye, a town 30km (18.5 miles) away from the city.

“I work as a labourer on building sites. I used to earn $14 a day but now I take home $16. I can’t afford to pay rent, education and food for my family if I was to live in Mogadishu,” the husband of two wives and father-of-five told Al Jazeera. “Only the rich can afford to live in this city. Everyone else is either struggling or has moved somewhere else.”

For Mumtaz, the solution is for less people to move to the city.

“Every Somali wants to live in Mogadishu. Until that changes, I don’t see anything changing. Prices will keep going up,” she said.