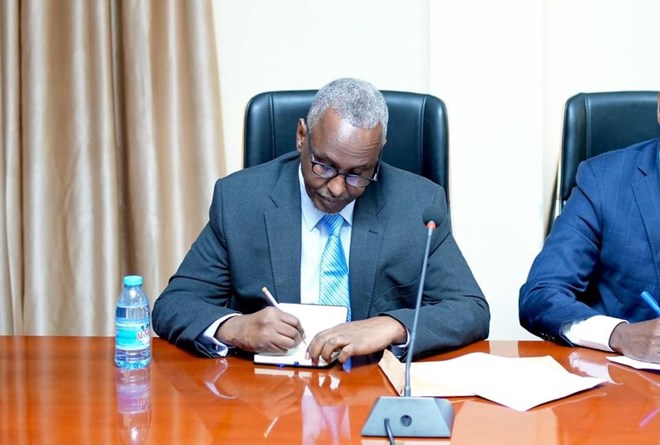 The controversial oil production sharing agreement between the Somali government and Coastline Exploration was completed on Thursday.

The original deal reached in Istanbul in February, according to the government, was amended five times before it was signed.

“We went over the contracts we signed in February 2022 to make sure their procedures and clauses were correct. Changes to specific articles in accordance with Somalian law were specifically suggested by the attorney general and foreign lawyers. The agreements have five annexed amendments (deed of amendment of the PSAs) that were made to them.” Minister of Petroleum and Minerals Abdirizak Mohamed said.

Upstream oil and gas company Coastline Exploration announced that it had signed seven PSAs with the Federal Government of Somalia. Each discovered field is expected to produce about 100,000 barrels of oil per day, according to the projection.

“Business is now welcome in Somalia. The Federal Government of Somalia and President Mohamud have both given their approval to Coastline Exploration’s Production Sharing Agreements and support our proposed oil exploration programme “The business stated in a tweet.

Coastline added that it had given the Central Bank of Somalia a $7 million signing bonus, one for each PSA.

“If our wells are successful, we anticipate paying Somalia many more millions of dollars in royalties, profit splits, and income taxes.”

William Richard Anderson, the CEO of the Houston-based company, said they hope to soon start exploring deep-water blocks off the coast of Somalia.

“We can now begin our exploration programme after receiving the clearance authorisation. The government of Somalia will be able to finance investments in infrastructure, healthcare, education, and other vital services that will benefit all of the country’s citizens, resulting in sustained economic growth and raising the standard of living. This will be a game-changer for the country.”

The agreements on Somalia and Coastline Exploration Company management were signed and completed in the presence of President Hassan Sheikh Mohamud, the Minister of Foreign Affairs and International Cooperation, the State Minister of the Ministry of Petroleum and Minerals, the Special Envoy of the President for International Trade Affairs, officials from the Somali Petroleum Agency (SPA), and representatives from Coastline Exploration.

The agreement was welcomed by the president, Hassan Sheikh Mohamud, who cited its importance for achieving economic independence.

This agreement shows that Somalia is open for trade and foreign investment following the conflict that has plagued the nation for so long. I want to thank Coastline for its dedication to Somalia and the fact that, in contrast to so many other businesses, it has kept its word to invest here. Coastline unmistakably sees a sizable opportunity in Somalia, and we concur with this assessment. The Federal Government will exert every effort to support this project, and we hope that the first exploration well will begin soon. As we work to develop our energy sector, which should provide tangible benefits for all Somalis, today represents a significant step forward for Somalia. Now, Somalia beckons with energy independence, increased tax revenues, and more foreign investment.

The Minister of Petroleum and Mineral Resources, Abdirizak Mohamed, said: “We are very excited about the potential of these offshore oil fields because we have seen how transformative new domestic energy sources have been for other countries in Africa. The announcement made today marks a turning point in the development of what is a crucial source of income for Somalia and really jump-starts the country’s energy sector.”

When the previous Somali President and Prime Minister called the Coastline Exploration agreement illegal in February, it set off a political avalanche.

Villa Somalia revoked the agreement shortly after it was announced, citing a presidential decree from August that forbade government organisations from signing international contracts while elections were taking place.

Suleiman Mohamed Mohamud, the attorney general, was given a directive by the federal government to look into the contract and take the proper legal action.

President Farmajo was aware of the agreement, according to Somalia’s former petroleum minister Abdirashid Mohamed Ahmed, although Villa Somalia vehemently denied the assertion.

Richard Anderson, the CEO of Coastline Exploration, disputed the government’s assertion that the PSAs were unlawful and insisted that they were “legally valid and that they are in full effect.”

According to Anderson, the original contract stipulated a 50-50 profit split and that Coastline would be required to pay a 30% income tax on any earnings. The government receives a royalty of 5% as well. The PSAs’ entire set of conditions, including the profit-sharing ratio, are predetermined for their 30-year duration and won’t change during that time.

The agreement reached on Thursday is the result of numerous attempts to reach a PSA with the federal government of Somalia.

Soma Oil & Gas, a company with a troubled past in Somalia, is contractually owned by Coastline Exploration, which was established in 2018. Soma, which was supported by Russian billionaire Alexander Djaparidze and chaired by former UK Conservative Party leader Michael Howard, was under investigation by the UK’s Serious Fraud Office for allegedly paying kickbacks but was later found to be innocent due to a lack of evidence.

A draught production-sharing agreement that could have given Soma Oil up to 90% of future oil revenues was also criticised. Soma Oil once employed former Somali Prime Minister Hassan Ali Khaire as a director.