Somalia calls on A.U. to support its campaign to lift the arms embargo imposed on it by U.N. Security Council 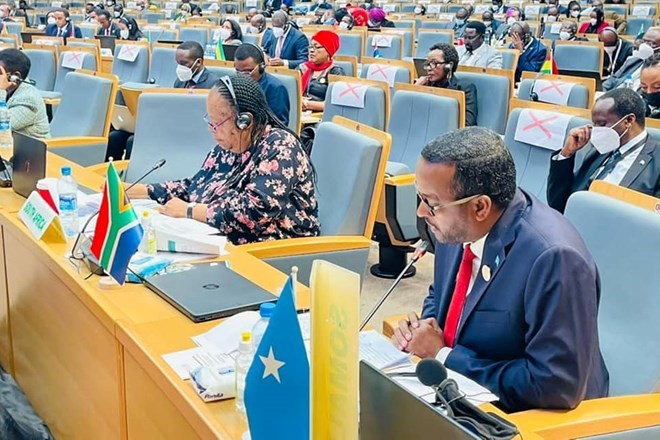 The Acting Foreign Minister and State Minister for Foreign Affairs and International Cooperation, Balal Mohamed Osman, participated in the 41st Ordinary Session of the Executive Council of the African Union held from 14-15 July in the Zambian capital, Lusaka.

The foreign ministers of African Union member states discussed challenges facing the continent. They reported on the implementation of the transition plan, including the quota system, audit skills, the emergency recruitment plan, and the mid-term implementation report of the 2022 African Union theme on nutrition.

The Somali government wants to fully assume its security responsibility from the African Union Transition Mission in Somalia (ATMIS). It was also agreed to stand firmly by Somalia in its campaign to lift it from the UNSC embargo so that it could arm its armed forces to maintain its security and confront terrorism and all destabilizing activities.

This year’s theme of the session was “Building resilience in nutrition on the African continent: Accelerate the Human Capital, Social and Economic Development.”