Somalia defeated South Sudan to win the CECAFA U-17 championship. 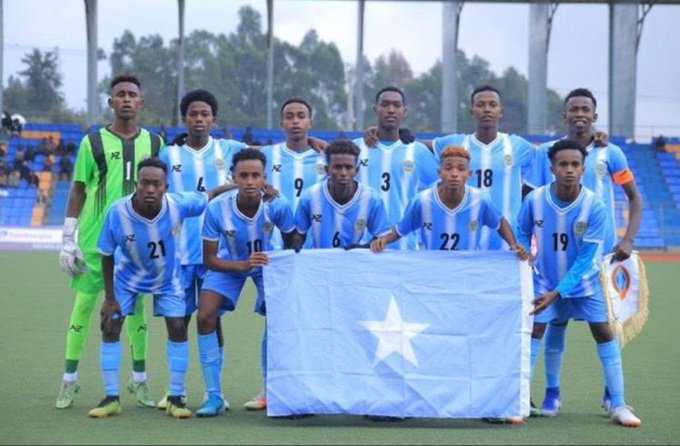 Surprise gift The TotalEnergies U-17 Africa Cup of Nations (AFCON) 2023 qualifiers for the CECAFA Zone have been won by Somalia, who defeated South Sudan.

In the championship game, which was held on Saturday at the Abebe Bikila Stadium in Addis Abeba, Ethiopia, team led by coach Nur Mohamed Amin defeated South Sudan 3-1.

The Somalia team, supported by more than 200 Somalis living in Ethiopia, went all out, dominated play, and won after defeating the favourites Uganda in the semi final stage and qualifying for the U-17 AFCOn 2023.

After only seven minutes, Abdihafid Mohamed Abdi gave Somalia the lead. However, the South Sudanese team put up a fierce fight, and Ajo Minari Alex Lomoro levelled the score after 48 minutes.

The Somalia team continued to dominate the match and defended well. It was Abdirahin Mohamed Dahir who netted two more goals to ensure his team makes history by winning the first regional title.
“This is a very sweet win for us,” said a happy Abdulle Abdullahi Abdulle, Somalia’s captain. The Somalia team coach Amin who was in tears was all praise for his players. “I told the people back home that we would win the title,” said Amin.

The South Sudan coach Bilal Felix Komoyangi said although they had lost in the final, his boys had put-up a good show and qualified for the U-17 AFCON 2023.

In a previous play-off game, the Tanzania U-17 team defeated the 10-man Uganda Cubs team 4-1 on penalties following a 90-minute tie of 1-1. At the stroke of halftime, Uganda took the lead thanks to a substitute, Farouk Lubega.

But after the break, Tanzania’s Ally Omar tied the score after Uganda’s goal scorer Lubega was given a red card. Alexander Mwakapambika, the goalkeeper for Tanzania, made two penalty kick saves to help his team win 4-1 while the Tanzanian team successfully converted all four of their penalties.