Somalia defeats Uganda in overtime penalties to advance to the U17 CECAFA finals. 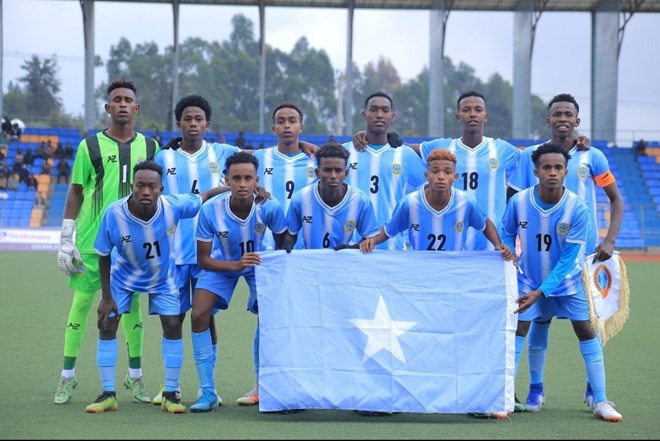 Somali Magazine –Somalia’s U-17 football team defeated Uganda on Wednesday in the semi-finals of the Council for East and Central Africa Football Associations (CECAFA), securing its first appearance in the championship game. Uganda was the defending regional champion.

Somalia ran into trouble late in the first half when Ugandan defender Jamal Ssemwogere easily headed in the rebound after Somali goalkeeper Abdikadir Mohamed was unable to stop a free kick from a precarious position.

Abdihafid Abdi, the star player for Somalia, intercepted a pass at midfield and wrapped the ball around the last defender in less than two minutes. Abdi kept his composure and confidently rolled the ball into the back right of the net with just the goalkeeper to beat.

The second half ended in a penalty shootout as a result of both teams’ inability to take advantage of the numerous scoring opportunities they created.

All eight of Somalia’s penalty takers succeeded, including goalkeeper Abdikadir Mohamed, who completed the comeback by cancelling out Arafat Nkoola’s missed opportunity with an outstanding goal that eliminated Uganda.

“I thank God for leading us to AFCON 2023,” the delighted Somalia coach Nur Mohamed Amin said after the match. “But we are still determined to win the championship.”

The young team received congratulations from Somalia’s Minister of Youth and Sports, Mohamed Barre Mohamud, for their historic triumph at the East and Central African Games.

South Sudan, who advanced to the championship match by defeating Tanzania on penalties on Wednesday, will play Somalia on Saturday.