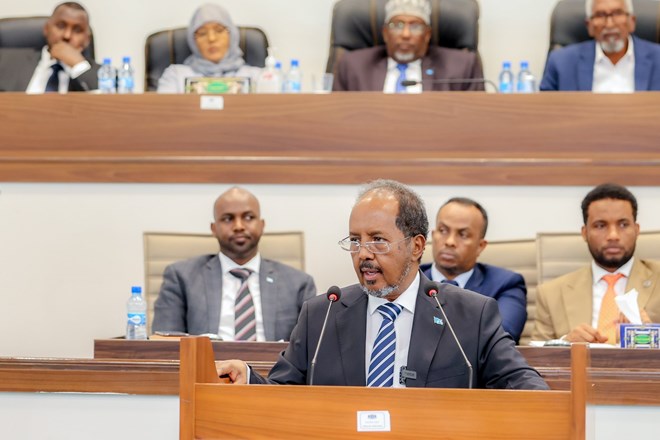 Tuesday, the second session of the Somali Parliament was officially launched by the president of the country, Hassan Sheikh Mohamud.

Drought, climate change, Somalia at peace with itself and the rest of the world, reconciliation and reconciliation, and the need to rebuild the security forces were the main topics of President Mohamud’s speech.

We have decided to speed up the fight to flush out the Khawarij. I have found no other way than to defend our honour, Islam, and nation. As soon as I took office, I faced two serious situations: the drought that affected more than 7 million people, and the militants who increased attacks on our vulnerable people.

He continued by saying that the only way to guarantee a peaceful nation where the rule of law reigns was the emancipation of the entire nation.

Without having been in power for very long, our government was able to see that the mobilisation of the Somali people played a big part in the liberation of the Khawarij across the entire nation.

The completion of the House Speaker elections, the vote of confidence in the Prime Minister and his Council of Ministers, and the creation of parliamentary committees were all actions that Mohamud praised the parliament for taking during the previous session.

He stressed the importance of finding a stable political setting that permits collaboration to resolve pressing national problems that call for political agreements.

According to President Mohamud, the purpose of the government’s international travel is to find a foreign policy that is amenable to both Somalia’s neighbours and the rest of the world.

“I talked about our shared objectives and the best way for them to get involved in the restoration of the Somali nation and their involvement in the war against the al Shabab” with the leaders of the nations I visited.

He gave the Somali people the reassurance that the core of the government’s policy would accept anyone willing to assist Somalia in pressing concerns while balancing Somali interests abroad.

He continued, “At the moment, Somalia needs a friend more than it needs an enemy.

The President proceeded by saying that as cattle and agriculture are the foundation of the economy, the effects of the drought have not only hurt the people but have also hurt the nation’s economy.

The worst drought Somalia has seen in more than 40 years has had an impact on close to 7.8 million people. Over 1.1 million people are currently displaced, and it is anticipated that 6.7 million people would experience severe food insecurity in Somalia by the end of this year.