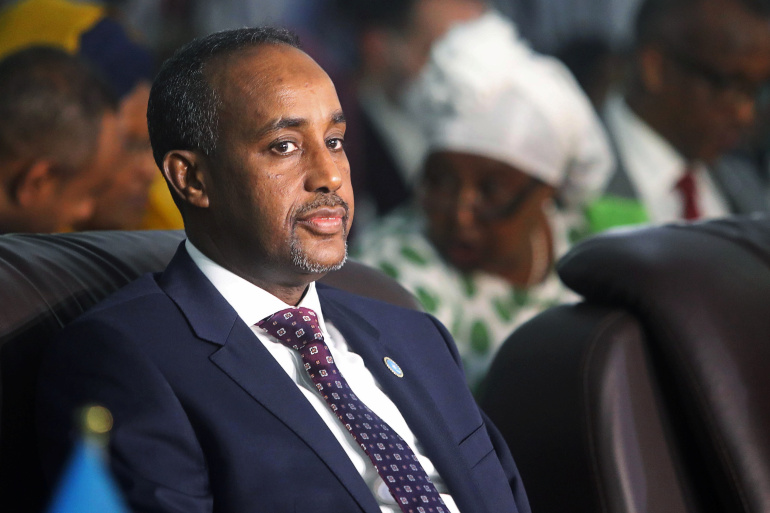 Clan elders will now pick legislators in September, who will then vote for a president on the new date, Prime Minister Mohamed Hussein Roble was quoted as saying by the state news agency [File: Feisal Omar/REUTERS]

After months of deadlock, political leaders in Somalia have agreed that the country’s long-delayed presidential election will be held on October 10.

The office of Prime Minister Mohamed Hussein Roble unveiled the timetable for indirect parliamentary and presidential elections in a statement on Twitter, saying stakeholders had agreed to a road map for a vote following two days of talks in the capital, Mogadishu.

“I commend the leaders of the council and hope the election will be a peaceful and transparent one, based on the agreed-upon schedule and processes,” the prime minister said.

President Mohamed Abdullahi Mohamed, commonly known as Farmaajo and the leaders of Somalia’s five states had been unable to agree on the terms of a vote before his term lapsed in February, triggering an unprecedented constitutional crisis.

The political impasse exploded into violence in April when negotiations collapsed and the lower house of parliament extended the president’s mandate by two years, sparking gun battles on the streets of Mogadishu.

Under pressure, the president reversed the mandate extension and ordered his prime minister to reconvene with the state leaders to chart a fresh road map towards elections.

In May, the warring leaders announced plans to commence the multi-stage election process within 60 days, helping ease political tensions.

The timetable announced on Tuesday schedules elections for the upper house on July 25, and the lower house between August 10 and September 10. Both houses will then convene and a vote for the president will be held on October 10.

Somalia has not held a direct one-person, one-vote election since 1969, the year Siad Barre led a coup and went on to rule for twenty years.

Barre’s military government collapsed in 1991 and Somalia fell into anarchy, and repeat efforts to organize such a ballot since have been scuttled by security problems or lack of political will.

The upcoming election, like others past, follows a complex indirect model.

Special delegates, chosen by the country’s myriad clan elders, pick lower house MPs while senators are nominated by state presidents and then endorsed by local legislatures.

This election was to go further in terms of inclusivity, with double the polling locations and almost twice as many delegates voting as the last election in 2017.