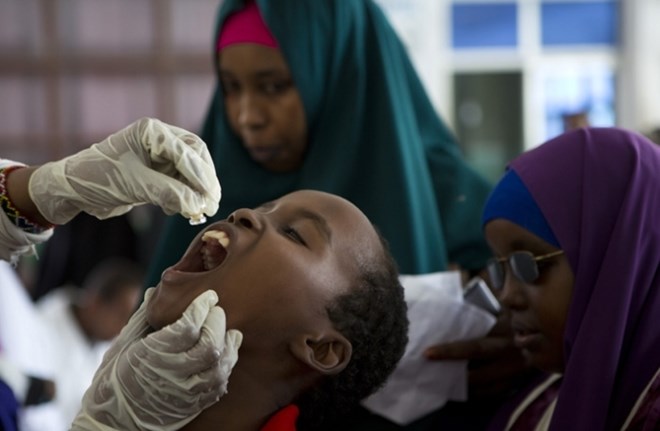 Somalia and the United Nations agencies on Tuesday started a five-day campaign to vaccinate 934,511 people against cholera in nine high-risk districts that are currently facing ongoing outbreaks of cholera.

The Ministry of Health and partners including the World Health Organization (WHO) and UNICEF said the first round of the oral cholera vaccination drive aims to vaccinate people including children above one year of age, pregnant women and internally displaced persons.

“To prevent cholera outbreaks in a sustainable way, we strongly advise affected communities to take two doses of cholera vaccine orally,” said the Minister of Health and Human Services Fawziya Abikar Nur in a joint statement issued in Mogadishu, the capital of Somalia. “We are urging our partners to assist us in improving access to water, sanitation, and hygiene facilities for vulnerable communities and the general public.”

Somalia has witnessed several cholera outbreaks since 2017 and these can be attributed to a large number of people having poor access to safe water and sanitation services, and natural hazards, including drought and floods, which have been further exacerbated by protracted conflict and large-scale population displacement.

The UN said the ongoing drought in the country has had a grave impact on Somalis — while displacing more than 770,000 people internally, it has dried up surface water sources and led to food insecurity in communities, which increases the risk of cholera infection as well as other waterborne diseases.

“While we need to step up our collective response to cholera and other waterborne diseases, especially in the areas of case management, we have over 2,100 community health workers deployed in 78 districts, including in 24 drought-affected districts,” said WHO Country Representative for Somalia Mamunur Rahman Malik.

Some 4,887 suspected cases of cholera, with 16 associated deaths, had been reported from 21 drought-affected districts in Somalia as of May 15, the UN said.

Around 62 percent of these cases were children aged below five years, while around half of the cases were females.

The populations that received the first dose will be targeted to receive the second dose during the next round of the campaign to boost the affected population’s immunity, it said.

“Parents and caregivers can take life-saving preventive measures for their children by taking them to get the cholera vaccine drops. Children are very susceptible to preventable diseases like cholera, especially with low access to water during this drought,” said UNICEF Somalia Representative Angela Kearney.