Somalia’s president has declared a “all-out war” on Al-Shabaab. 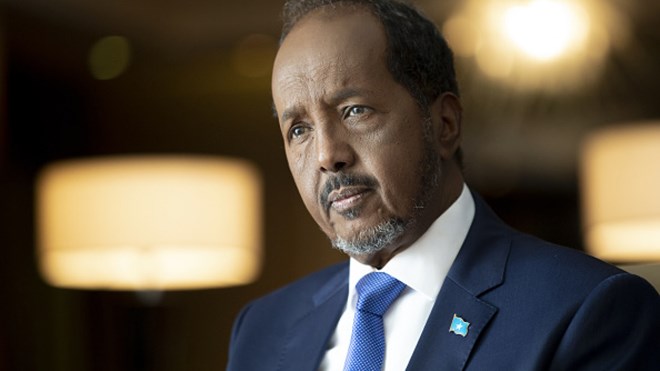 Somali Magazine  -In his first address to the nation since the militants launched a devastating 30-hour hotel siege in Mogadishu, Somalia’s President Hassan Sheikh Mohamud declared “all-out war” to remove Al-Shabaab on Tuesday.

The attack, which began on Friday night, was the largest to hit Somalia’s capital since Mohamud took office in June, and it highlighted the difficulty of putting an end to the Al-Qaeda-linked group’s 15-year insurgency.

According to the Norwegian government, at least 21 people were killed and 117 others were injured in the gun and bomb attack on the popular Hayat Hotel, with the dead including Norwegian citizens.

“I know the Somali people are tired of repeated condolences and sadness, and I know you lose respectable people in every terrorist incident,” Mohamud remarked.

“As a result, I urge you to be ready for all-out combat against the merciless (people) who are antagonistic to our peace,” he said in a statement issued by the president.

“We are determined to weaken the terrorists who destroy our people until all of the regions they control are liberated,” he declared, without elaborating.

Earlier on Tuesday, Mohamud called a meeting of the national security committee, which included the prime minister, interior minister, and foreign minister, as well as the country’s defence leaders.

Later that evening, in a televised speech, Mohamud told citizens that “Somalia will beat the enemy that is oppressing its country, people, and religion.”

“Our government, army, and people will never surrender until Somalia is free of terrorism,” he declared.

The Hayat was a popular gathering place for government leaders, and scores of people were inside when a suicide bomber detonated a big explosion, allowing highly armed gunmen to enter.

The siege lasted until after midnight Saturday, when security troops blasted the building, destroying much of it.

The United States, Britain, the European Union, and Turkey, as well as the United Nations, all sharply condemned the attack, as did ATMIS, the African Union force tasked with assisting Somali troops in taking over primary security responsibilities by the end of 2024.

Earlier this month, Washington announced that its forces had killed 13 Al-Shabaab operatives in an air raid, the latest strike since President Joe Biden ordered the re-establishment of a US combat presence in Somalia in May, overturning Donald Trump’s decision.

Mohamud, who was elected in May after a protracted political crisis, stated last month that defeating the insurgency would require more than just a military approach, but that his government would negotiate with Al-Shabaab only when the time was right.

Since his victory, the group has carried out multiple attacks in the predominantly Muslim country.

It also launched an assault into neighbouring Ethiopia last month, raiding a military facility on the border.

In 2011, an African Union force drove Islamist militants who advocate a strict interpretation of Sharia, or Islamic law, out of Mogadishu.

They still control vast swaths of countryside and have the capability of launching lethal strikes, frequently targeting hotels and restaurants as well as military and political targets.