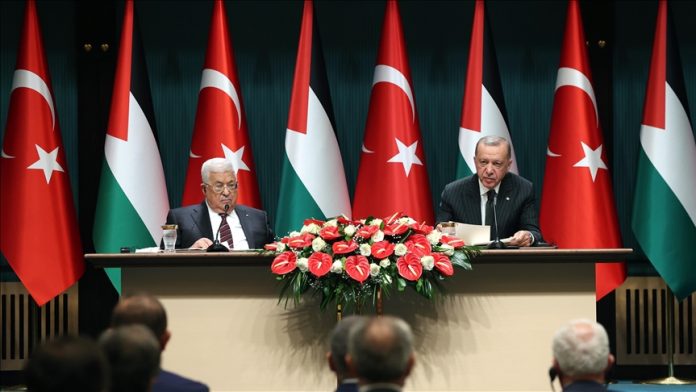 President Recep Tayyip Erdogan reiterated on Tuesday that recent moves to restore Turkey’s relations with Israel will not lessen the country’s support for Palestine.

“The steps we have taken in our ties with Israel will in no way lessen our support for the Palestinian cause,” Erdogan said during a joint news conference with his Palestinian counterpart, Mahmoud Abbas, in Ankara.

Erdogan stated that Turkey maintains its long-standing solidarity with Palestine in the “strongest possible way.”

“Turkey, which has recognised the Palestinian state since its inception, defends the concept of a two-state solution on all platforms,” he continued.

Erdogan stated that Ankara rejects any steps intended at changing the status of Jerusalem or its Al-Aqsa Mosque, adding, “We told this to our Israeli counterparts.”

He stated that Palestine supports Turkey’s efforts to improve relations since engagement with Israel will provide Turkey a better chance to defend the Palestinian cause.

“Palestine will always have a particular place in Türkiye’s heart,” he added, adding that Ankara wants to improve ties with Palestine and see it prosper.

“I reiterate that the formation of an independent Palestinian state with Jerusalem as its capital based on the 1967 borders and UN guidelines is critical for the peace and stability of our entire region,” Erdogan stated.

Abbas, for his part, praised Turkey’s support for the Palestinian people.

He emphasised the importance of “peaceful popular opposition” and the rejection of “violence and terrorism.”

“We seek full UN membership and demand that countries who support the two-state solution recognise the State of Palestine.”

He also praised Turkey for its assistance in assisting Palestine to become a UN observer state.

“We acquired observer status in the United Nations a few years ago, and the first credit for that goes to Türkiye,” Abbas remarked.