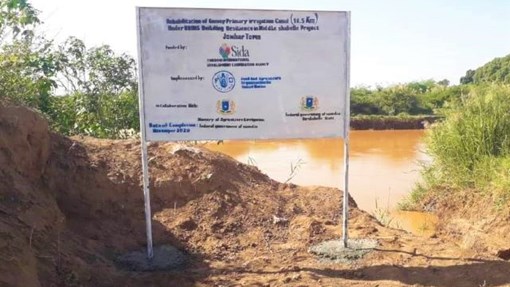 The Swedish International Development Cooperation Agency (Sida) has renewed its funding to support ongoing efforts to strengthen riverine farmers’ resilience in the Jowhar corridor by improving water access and management to boost productivity.

The Food and Agriculture Organization of the United Nations has praised the Swedish government’s timely contribution of USD 2 million to Somalia through the Swedish International Development Cooperation Agency (Sida) to the Building Resilience in Middle Shabelle (BRiMS) Project (FAO).

By addressing some of the underlying vulnerabilities in Middle Shabelle, Somalia’s breadbasket, the action will significantly increase the resilience of vulnerable people’s livelihoods to food crises. In light of recent, recurrent drought and flood emergencies, the project’s main focus will be on water: access to water, sustainable management, and its use for production.

“We appreciate Sweden’s renewed and timely commitment to strengthening one of the region’s most important building blocks of agricultural food systems,” FAO Representative to Somalia Etienne Peterschmitt said. “The region’s ongoing severe drought demonstrates that we must invest in resilient communities now more than ever before,” he added. “For the Middle Shabelle region in particular, this means equitable access to and sustainable management of water.”

Somalia is extremely vulnerable to recurring shocks, which can have a cascade effect. Since the 1990s, droughts, flash and riverine flooding, cyclones, locusts, disease outbreaks, conflict, and subsequent large-scale displacement have become more common in the country. Flooding of the Shabelle River basin in the Jowhar corridor destroys crops and villages on a regular basis.

In areas near the river, there are roads and large-scale human displacement.
During rainy seasons, most of the villages along the river are subjected to recurrent flooding, as seen in 2019 and 2020.

The project proposes the rapid closure of river breakage points and the reinforcement of weak river embankments to protect families living in and around Jowhar towns ahead of the upcoming rains. It’s also critical in these hard-to-reach areas to assist farmers in forming collective farmer groups.

Farmer groups create economies of scale by aggregating local input supply needs and production, enhancing their ability to access services and participate effectively in supply chains and markets. This is especially important in Middle Shabelle, where insecurity and access restrictions can be a deterrent.