Sweden’s socialist prime minister declares that the country does not desire “Somali-towns” in a last-ditch effort to quell the growing anti-immigration party before the September election. 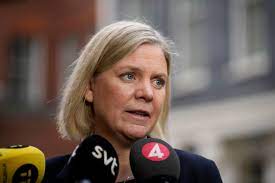 Magdalena Andersson, the prime minister of Sweden, who often favours free borders, has declared that she will outlaw the ethnic ghettos in the major cities, which are havens for organised crime.

However, it appears to be Andersson’s last-ditch effort to weaken support for the anti-immigration Sweden Democrats, which polling predicts will be the second-largest party in parliament after elections on September 11. Migration and integration experts and sociologists, on the other hand, do not like the proposal.

In an interview with the daily newspaper Dagens Nyheter, Andersson, a member of the Swedish Social Democrats, stated that he and his party “don’t want Chinatowns in Sweden, we don’t want ‘Somali-towns,’ or Little Italys,” in reference to the well-known multicultural ethnic enclaves seen in Western cities, particularly in the United States.

The Swedish prime minister was formerly a member of the government that authorised 180,000 migrants to settle in Sweden during the migrant crisis of 2015–16. Later, she expressed “regret” over the government’s decision to approve the entry of so many refugees.

Andersson is now adopting a stance that is similar to that of the nation’s minister of immigration, Anders Ygeman, who previously declared that Swedes want to limit the concentration of people with an immigrant background in the most troublesome areas of the cities, which is very similar to the immigration policy of neighbouring Denmark.

According to a report from the Hungarian newspaper Mandiner, this does not, however, imply that individuals would be relocated forcibly, as occurred in Denmark; rather, various solutions are being considered, such as the building of attractive housing cooperatives that would enable a mixed population.