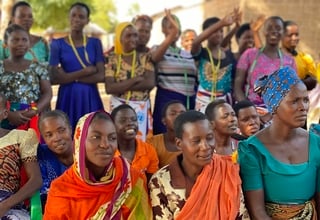 Teen mothers in Tanzania who were expelled from school after becoming pregnant have praised a new policy that gives them the opportunity to go back to school to fulfill their dream of completing their education.

The young mothers, who have been allowed to resume classes, have blamed the pervasive ignorance of sexual education and deep-rooted social taboos for their misery.

The lack of education in reproductive health is a key factor in teen pregnancies as many girls who fall into the trap do not always know their menstrual cycles, according to girls’ rights campaigners.

Socio-cultural taboos around teenage pregnancy often leave young mothers highly stigmatized by society, campaigners said, adding that in many parts of the country, the pregnancy is considered to be the girl’s fault.

“My mother never taught me about changes in my body. If I had known then, I wouldn’t have gotten pregnant and destroyed my school routine,” said Hanifa Mtawali, who was expelled from Temeke Secondary School in Dar es Salaam when she became pregnant.

But Mtawali is pleased with the new policy introduced by Tanzania’s first female president, Samia Suluhu Hassan, which has offered her a second chance to complete her education.

“I am very happy to be back in school. I want to work even harder to ensure that I succeed in my studies,” she told Anadolu Agency

Human rights campaigners have long accused Tanzania of discrimination after the late President John Magufuli endorsed the expulsion of pregnant girls from public schools and barred them from returning to class after giving birth.

For decades, pregnant students and adolescent mothers had been forced to drop out of school. In 2017, Tanzania adopted a discriminatory ban that prohibited them from continuing their education in public schools and threatened to deregister non-governmental organizations that challenged the ban.

But in November 2021, Tanzania’s Ministry of Education announced that girls who had dropped out of school because of pregnancy could return to school, effective immediately. This change allows girls to re-enroll within two years of giving birth, or if later than two years, they can enroll at an alternative education center that offers a condensed version of the curriculum, the government said.

The Tanzanian government has also adopted additional measures, such as publishing detailed guidelines on how long pregnant students can stay in school, how much time they are allowed to be absent from school after giving birth, and the type of support they receive when they return, officials said

Zaina Katondo was barely 17 when she got pregnant. A hardworking student at Buhangija Secondary School in northern Tanzania’s Shinyanga region, Katondo had dreams of working as a teacher in her impoverished village.

Instead, she was kicked out of school because of her pregnancy, and her dreams crushed.

Now 19, the young mother wakes up early to feed and bathe her daughter. Then she straps the girl onto her back as she walks through sun-fried barren land to fetch water.

Katondo is one of the countless victims of a social epidemic, wrecking the lives of young girls and women across Tanzania.

Although some young mothers opt out of school simply to raise newborns, many others like Katondo were expelled from school in areas where out-of-wedlock pregnancies are a social taboo.

“For me, this is like a golden chance to prepare my future life. I will never again make a mistake,” Katondo told Anadolu Agency.

In Kahama district, which neighbors Katondo village,18-year-old Miriam Kahise is lying idly on a tattered woven mat, cuddling her baby as a gentle breeze blows on banana trees.

Kahise was suspended from Chishimbi Secondary School in Kahama after she became pregnant. Her father accuses her of eroding family values.

“When I was expelled from school, I was broken-hearted. It felt like the end of my life. I thank God my school has accepted my request to go back,” she said

“The girls who become pregnant in their teens are more likely to suffer complications and even die during childbirth,” said Assery Mchomvu, a gynecologist and obstetrician based in Dar es Salaam.

At the root of the crisis is a deeply patriarchal social structure where girls like Katondo often face rejection from their families when they get pregnant, say local residents and experts.

“Girls do not have the power to make decisions about their health and life,” said Deborah Akilimali, a girls’ rights activist at the Tanzania Gender Network Program. Many teenage mothers are often forced into marriage, especially in rural areas — suggesting a deeply rooted stigma around early pregnancy, said Akilimali.

According to her, the Tanzanian government should set out clear guidance for schools and government officials to ensure that these girls can return to school.

“There should be laws and policies that protect girls who are pregnant or mothers. The government should also ensure that pregnant students and adolescent mothers have the support they need,” she said​​​​