Thanks to this determined dentist, Mogadishu now has free ambulances. 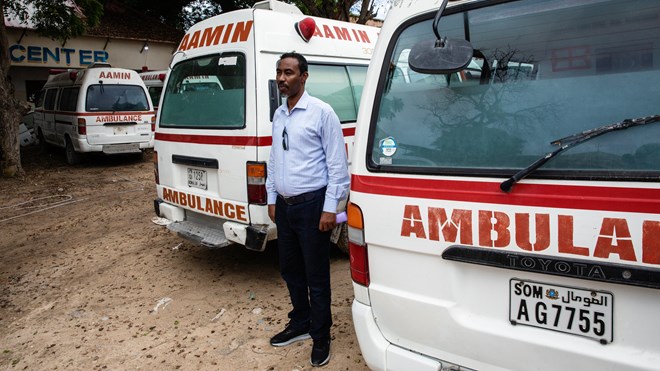 Dr. Abdulkadir Abdirahman Adan was outraged by an all-too-common sight on his way to and from his dentistry clinic every day: badly injured and dead Somalis being taken to hospitals in wooden hand carts or wheelbarrows.

This happened in 2006 in Mogadishu, Somalia’s capital, when government troops, backed up by Ethiopian forces, were fighting Islamist insurgents in a terrible war that saw thousands of people slain and many more mutilated.

Dr. Adan, who had recently returned from studying overseas and had set up his dentistry business in the city’s largest open-air market, felt powerless to stop the killing. However, he believed he could help still-living victims receive treatment more quickly and ensure the dead were properly cared for.

“I asked myself, ‘How can I help my people?’” Dr. Adan said recently in an interview at his office.

His first step was modest: He rented a minibus, painted blue and white in the color of Somalia’s flag, and paid its owners a few dollars a day to carry the injured to safety. People would call Dr. Adan or the bus owners on their cellphones to direct them to those in need of aid.

But this approach could help only a handful of victims each day, and the city’s violence was only intensifying.

“I thought the situation would get better, but it kept getting worse,” he said.

So within months, Dr. Adan poured all his savings — about $2,400 — into buying a van, with some additional funding coming from a campaign he ran urging university students to donate $1 to save a life.

And so began Aamin Ambulance: the first and still the only free ambulance service operating in the capital of over three million people.

“Anyone who is in need of an ambulance, 24/7, we are here,” said Dr. Adan, 48. “And it is free.”
Dr. Abdulkadir Abdirahman Adan was outraged by an all-too-common sight on his way to and from his dentistry clinic every day: badly injured and dead Somalis being taken to hospitals in wooden hand carts or wheelbarrows.

This happened in 2006 in Mogadishu, Somalia’s capital, when government troops, backed up by Ethiopian forces, were fighting Islamist insurgents in a terrible war that saw thousands of people slain and many more mutilated.

There have been few extended periods of peace in Mogadishu since Aamin Ambulance was created, with Al Shabab, a Somali terrorist group connected with Al Qaeda, continuing to carry out periodic attacks. The group’s biggest attack, a twin truck bombing that killed 587 people, occurred in 2017, but it remains a continual threat. Just this week, President Biden authorized the deployment of hundreds of U.S. troops to the country on a counterterrorism mission.

The Aamin Ambulance workers are often among the first to arrive at the scene of an attack, often just minutes after a bomb blast.

This has meant that Dr. Adan and his team are often the first call for journalists looking to verify the number of casualties and to help fact-check what transpired at the scene of the attack.

But this speed also puts the team at risk: The Shabab will sometimes detonate a second bomb in the area of an attack, specifically meant to target those arriving to help.

Abdulkadir Abdullahi, a nurse with Aamin, has experienced this type of explosion while evacuating casualties, with the windows of the ambulance he was in once shattering from a blast as he prepared to leave a scene. “Just when you think it is safe, it turns out that it isn’t,” Mr. Abdullahi said.

Responding to terrorist attacks is hardly the service’s only mission. It also transports sick children, mothers in labor, accident victims and anyone else in need of urgent care. Through its 999 hotline, the team fields a minimum of three dozen calls a day.

It also engages in public health campaigns, including educating people about Covid-19 and providing first-aid training.

Despite recent progress on some fronts, the health sector remains weak in Somalia. There are few public hospitals, and receiving treatment at private facilities is expensive and out of reach for many.

Mogadishu is particularly vulnerable to infectious diseases, with many residents living in cramped settlements with unsanitary conditions. Tens of thousands of displaced people, many of them with unvaccinated and malnourished children, continue to flock to the city, presenting a growing health challenge for the authorities, who must depend on private groups to deliver the services the government can’t.

“This is why the work that Aamin Ambulance does is indispensable,” said Mohamed Adow, the director of health at the Benadir Regional Administration, which oversees Mogadishu. “We need more of them.”

Dr. Adan is not alone in his civic engagement. His work is among many citizen-led initiatives that have sprung up across Somalia since its central government disintegrated in 1991.

For decades, this Horn of Africa nation has been caught between factional wars and terrorism, with successive weak governments unable to fully secure the country or provide key services. But through it all, Somalis have cobbled together some basic services: building schools and universities, establishing thriving telecommunication and banking services, collecting garbage, building streets and even rehabilitating child soldiers.

“People were the ones who made their own development, their own progress,” Dr. Adan said.

While Dr. Adan and his team have been exposed to the grisly aftermath of many attacks, the twin truck blasts on Oct. 14, 2017, at a busy intersection in Mogadishu still stand out, with nearly 600 killed and 316 injured.

“It was something that is not good to remember,” Dr. Adan said.

On that afternoon, he was about five minutes away from the bombing and immediately rushed there to meet his team. “Lots of people were crying, dying, bleeding,” he remembered. “It was highly disastrous. It is still like a nightmare in our mind.”

But the horrific attack brought much-needed recognition of the ambulance service, among both Somalis and international donors.

Nimo Mohamed was one of the many Somalis who rushed to the scene of the explosion that day to help. What she saw — burned body parts, mangled vehicles, collapsed buildings — shocked her, but also made her determined to do what she could to improve life in the capital.

She soon volunteered with Aamin and pursued a degree in nursing and midwifery.

In the days after the attack, a crowdfunding campaign for Aamin drew contributions from the Somali supermodel Iman and the British rock band Coldplay. Abdi Addow, a Somali-Swede, said he helped launch the campaign because he was both moved and surprised that Aamin provided such a public service for free.

In Somalia, he said, “Everyone is focused on his own benefit, of making profit out of the poverty and the chaotic systems.” But with Aamin Ambulance, he added, “They are the ones that always have the courage to help other people.”

Dr. Adan said he picked up the spirit of volunteerism and generosity to others from his grandfather, a religious scholar. Dr. Adan’s father taught the Quran and other religious subjects, and his mother ran a small shop.

Years after finishing high school in the capital, he left Somalia at the turn of the century to study dentistry at Peshawar Medical College in Pakistan. While there, he said, he was inspired by the example of Abdul Sattar Edhi, who had begun Pakistan’s largest ambulance service.

Dr. Adan’s work has not brought him the universal good will of the country’s authorities, with some questioning if the speed with which his team arrives at attack scenes means they were tipped off in advance. Other officials have expressed suspicions about how he’s able to afford running the service.

Dr. Adan dismissed the idea of getting any early attack warnings and said he funds the ambulances through income from his own dental practice, along with support from local companies, the United Nations and other nongovernmental organizations.

Aamin’s workers face harassment and even beatings by security forces, who regularly deny them access to pass roadblocks when carrying injured people.

“Security forces put a gun in your mouth and threaten you,” said Ali Mohamed, an ambulance driver with Aamin for 14 years. In its decade and a half of operation, three Aamin staff members have died on the job as a result of gunshots or accidents.

So far, the service has not received any threats from the Shabab, Dr. Adan said.

His future ambitions are to offer a free hospice and mortuary service in Mogadishu and to expand the ambulance service beyond the capital, eventually catering to the entire country.