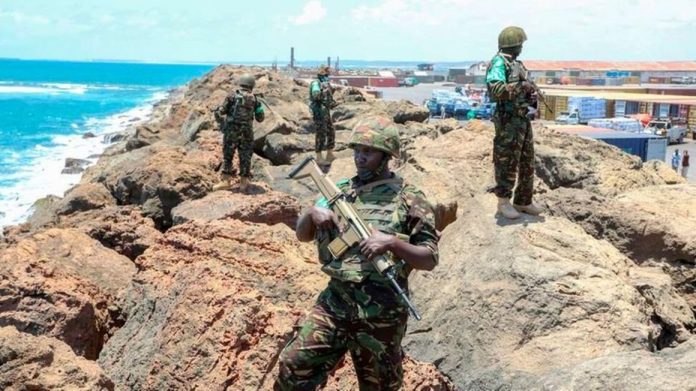 MOGADISHU, Somalia (Somali Magazine) — The African Union Transition Mission in Somalia (ATMIS) honoured outgoing top commanders from the military and police components on Saturday for their contributions to the mission’s transition from the prior African Union Mission in Somalia (AMISOM).
The 74 officers, who included Sector Commanders, Staff Officers attached to the ATMIS Force headquarters, and Individual Police Officers (IPOs), were honoured at a medal and farewell ceremony in Mogadishu presided over by Fiona Lortan, the Deputy Special Representative of the Chairperson of the African Union Commission (DSRCC) for Somalia.

Ms. Lortan praised the officers for their significant commitment to Somalia’s peace and security, particularly during the transition period from AMISOM to  ATMIS.

Ms Lortan added, “Your contributions have been essential, and your wealth and depth of knowledge will be missed.”

Lt. Gen. Diomede Ndegeya, the ATMIS Force Commander, praised the officers for their excellent service to the mission and strong discipline that enabled them to complete their tasks.

“I must commend our soldiers in all sectors, as well as their commanders, for their visible and long-term efforts in carrying out given duties and tasks.” You were the most valuable asset in disrupting and degrading Al-Shabaab within the ATMIS Area of Responsibility. This has permitted the establishment of favourable conditions for peace and stability in Somalia’s major population centres,” stated Lt. Gen. Ndegeya.

ATMIS Police Chief of Staff, Commissioner of Police (CP) Rex Dundun, congratulated the 17 officers for their services to Somalia’s long-term peace and prosperity.

“This group of officers witnessed and contributed to two significant milestones in Somalia.” First, there were successful democratic elections across the country, and then there was the transition from AMISOM to ATMIS,” said CP Dundun.