The first session of the Council of Ministers has come to an end. 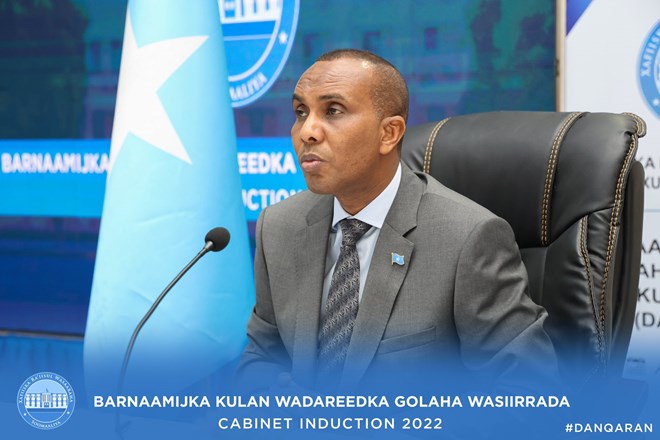 The agenda was centred on security sector reform, economic recovery, drought relief, and constitutional reform.
According to the PM’s office, the inaugural meeting will serve as an orientation to how the government works.

Barre told MPs that they are tasked with carrying out the government’s mandate and urged cooperation across federal ministries, noting that public trust in Somalia’s embryonic institutions will not be easily restored.

“The Somali people have entrusted you with our mission, which I hope we can do successfully. The Prime Minister’s Office is coordinating, directing, and strengthening government agencies. We must finish what we started and work day and night.”

Senior advisors, civil servants, and members of the security sector were also present for the two-day meeting.

President Hassan Sheikh Mohamud attended a dinner for the new ministers in the evening.

The President directed ministries and government officials to prioritise Somalia’s catastrophic drought. International experts have cautioned that if Somalia is to avoid starvation, cooperation and urgency are necessary.

“You have taken on a historic duty. It has the potential to save both the Somali people and this administration. We can achieve this by pooling our resources and wisdom to rid the land of drought, violence, and insecurity.”

Mohamud told reporters in Mogadishu on Tuesday that his government will launch a “complete battle” against the militant insurgency organisation Al Shabaab, which had slaughtered at least 21 people during a multi-day hotel siege.

During the announcement, Somalia’s government stated that it will establish a new ministry to combat climate change, as well as merge the constitution and justice ministries into the Ministry of Justice and Constitutional Affairs.