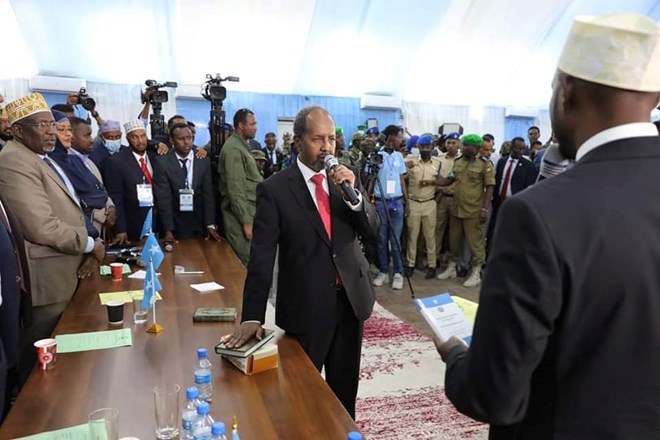 Dr. Workneh Gebeyehu, the Executive Secretary of the Intergovernmental Authority on Development (IGAD), congratulated H.E. Hassan Sheikh Mohamud on his election as President of the Federal Republic of Somalia.

Hassan Sheikh Mohamud, who was president of Somalia from 2012 to 2017, received 214 votes in the final round of voting on Sunday, while departing president Mohamed Abdullahi Farmaajo received 110 votes.

Hassan Sheikh was sworn in immediately after the outgoing president accepted defeat.
In his statement, the Executive Secretary expressed IGAD’s heartfelt congratulations to H.E. Hassan Sheikh Mohamud, the Somali government, and the Somali people on his election as President of the Federal Republic of Somalia on Sunday, May 15, 2022, a successful conclusion to the country’s election cycle.

The Executive Secretary notes that H.E. Hassan Sheikh Mohamud’s victory, earning him a second stint in the office of the President of Somalia, is a clear testimony of the trust and confidence that the people of Somalia have in his leadership qualities.

The Executive Secretary expresses confidence that President Hassan Sheikh Mohamud will move expeditiously to form an inclusive Cabinet, and begin the enormous task of uniting the Somali people and tackle other urgent national priorities, including preserving the security gains, sustain focus on fighting Al Shabaab, and addressing the dire humanitarian situation. IGAD stands ready to support the Government in this regard.

“IGAD, including its Organs and Institutions, pledge their continued support and look forward to working with you to deliver on your national priorities, and promote regional integration and development”, affirms H.E. Dr. Workneh Gebeyehu in his message.