The Minister of Defense travels to East Africa to arrange security assistance for Somalia. 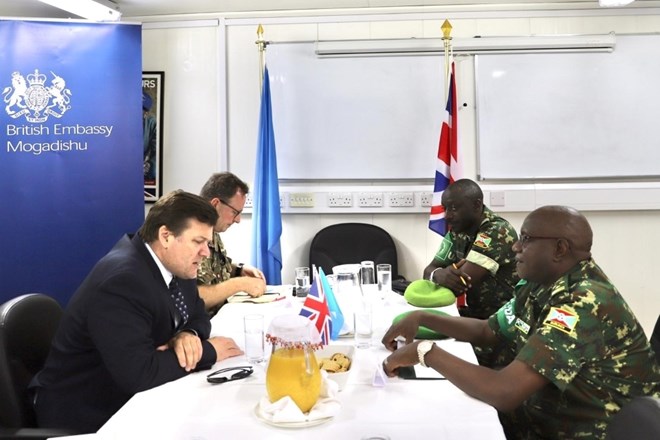 The Minister of the Armed Forces has been to East Africa to meet with key defense partners to discuss coordinated efforts to improve regional stability and security in Somalia.

James Heappey traveled to Somalia, where the UK is collaborating with East African friends to assist the Somali state in assuming security responsibilities from foreign forces. Under the African Union Transition Mission in Somalia, the UK conducts pre-deployment training for African Union (AU) troops from partner countries as they prepare to deploy to support Somali forces in defending civilians from Al-Shabaab and other terrorist groups (ATMIS). Over 70 British troops are stationed in Somalia, and UK personnel have trained approximately 1,000 Somali soldiers and instructors to assist in the development of their capabilities.

Minister Heappey met with Foreign Minister Abdisaid Muse Ali and Defence Minister Abdulkadir Mohamed Nur to discuss the way forward for Somalia. He also met and spoke to the British troops currently assisting with the security sector reform in Somalia and ATMIS Force Commander Lt Gen Diomede Ndegeya about the challenges they face.

The UN-backed ATMIS mission recently replaced the previous African Union Mission in Somalia (AMISOM), with a revised mandate to take the mission forward by transferring security responsibilities to Somali forces and institutions.

The Minister also travelled to Kenya, Uganda and Burundi – all important defence partners for the UK and major contributors to ATMIS

– The United Kingdom is dedicated to assisting Somalia and the wider region in achieving security and stability.

– Meeting with leaders from our most critical allies and partners in East Africa to explore how we can continue to work together to achieve our shared security goals was extremely beneficial.

Kenya’s Cabinet Secretary for Defence, Eugene Wamalwa, met with the Minister of the Armed Forces. Kenya has moved thousands of troops to its northern border to help maintain security. Somali-based terrorist groups such as Al-Shabaab have carried out cross-border terror strikes in Kenya. Kenya is the UK’s closest East African defense partner, with UK and Kenyan soldiers collaborating and training at the British Army Training Unit.

In his first visit to Uganda in his role as Minister for the Armed Forces – a demonstration of the UK’s ongoing commitment to our security partnership – Minister Heappey met with President Yoweri Museveni and Defence Minister Vincent Ssempijja to discuss mutual security challenges and how to promote regional stability.

Uganda is the largest troop contributor to ATMIS, with more than 6,000 personnel currently in the country, and many Ugandan troops have sacrificed their lives to help bring order to Somalia. UK personnel provide pre-deployment training to Ugandan soldiers heading to Somalia, sharing essential military skills including first aid and heavy weapons training.

He also laid a wreath at the war memorial in Bujumbura and paid tribute to the Burundian peacekeepers who lost their lives in a recent attack in Somalia, which killed up to 30 AU troops.