The new president of Somalia has similar political and security concerns. 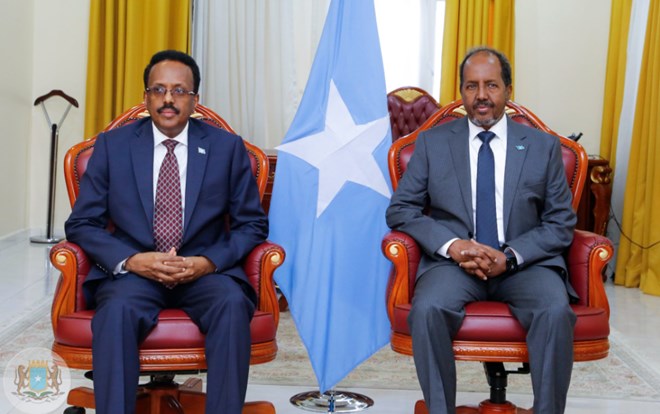 Somalia’s next president will begin his four-year tenure dealing with familiar concerns such as the country’s political divisions and the rise of al-Qaida-linked militant organization al-Shabab assaults.
President Hassan Sheikh Mohamud takes office in the face of a politically divided country, great public expectations, and the specter of al-Shabab, which has been a formidable menace since its inception in 2007.

Former deputy prime minister Fawzia Yusuf, who campaigned for president in the recent elections, said the incoming president faces a difficult task in forming a functional cabinet because of the various competing interests.
“People want him to choose people from other tribes because our system is currently founded on tribal 4.5,” she said. “One of the difficulties is putting together a very strong Cabinet, which are technocrats which are not based on tribal but on meritocracy.”

The distribution of power in Somalia is on a clan-based system locally known as the 4.5 system, where majority clans are allocated majority seats in parliament while the smaller clans, grouped together, get the remainder.

In the coming days, the president is expected to name a new prime minister who will need parliamentary approval before proceeding to name a Cabinet.

Besides tackling the political question, Mohamud must contend with the security threats posed by militant group al-Shabab.

According to Abdurahman Sheikh Azhari, the director of the Mogadishu-based Center for Analysis and Strategic Studies, the new president, like his predecessor, doesn’t have much leeway in dealing with al-Shabab.

Despite al-lack Shabab’s of interest to negotiate as a result of its recent successes, Azhari believes that communication is still a viable alternative.

“I believe the government can talk indirectly with portions of the al-Shabab leadership who may want to surrender or reject the group with the help of foreign and regional partners,” he said.

Yusuf, too, believes that the new president should explore an alternative approach, such as opening lines of dialogue with the militant group.

“Another difficulty, as I already stated, is security,” he added. “Security is a significant issue. Al-Shabab is a serious issue, and their demand is to be free of foreign forces, such as ATMIS or international military.

By ATMIS, Yusuf was referring to the U.N.-authorized African Union Transition Mission in Somalia. Its mandate includes reducing the threat posed by al-Shabab and conducting a phased handover of security responsibilities to Somalia. ATMIS is expected to end its mission in 2024.

Having had the backing of most opposition candidates during the May 15 vote, Mohamud now has to avoid a fallout while ensuring he puts in place a competent team to deliver his election promises.

Analysts say the new leader could take advantage of the planned return of U.S. forces to the country to bolster the war against al-Shabab and strengthen the national army. For now, the country is waiting to see who Mohamud will pick as prime minister.