The President of Somalia is in Kampala for the Ugandan Independence Day festivities. 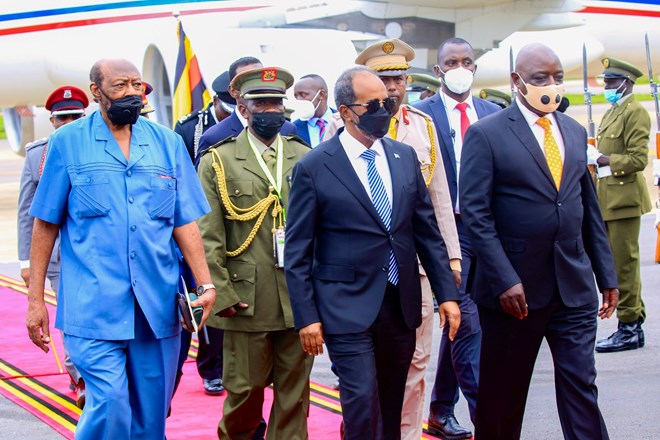 Somali Magazine -Saturday saw the arrival in Uganda of a delegation headed by Somali President Hassan Sheikh Mohamud to attend the 60th anniversary of Uganda’s independence from Britain.

President Mohamud will have bilateral discussions with his Ugandan counterpart Yoweri Museveni while he is in Kampala to discuss aiding the Somali government in securing support from the region for ongoing offensive operations against al Shabab and enhancing security cooperation.

In recent operations, hundreds of militants have been killed as Somalia’s armed forces, assisted by local militias and foreign allies, wage an aggressive counteroffensive against the al-Qaida affiliate in various parts of the country.

He offered his congratulations to the government and people of Uganda on the occasion of the nation’s 60th anniversary of independence, which is currently being observed.

In response to an invitation from the Ugandan government, a number of other heads of state have arrived in the nation. One of them is the president of Kenya, William Ruto, who was welcomed at Entebbe Airport by State Minister for International Affairs Henry Okello-Oryem.

Along with Burundi, Djibouti, Kenya, and Ethiopia, Uganda was one of the first five AMISOM troop-contributing nations. Work to weaken al-Shabaab and increase the capability of the Somali Security Forces, military, and police began in March 2007.